Never Try This At Home: Not For The Easily Offended

By DannyH Last edited 98 months ago
DannyH Never Try This At Home: Not For The Easily Offended 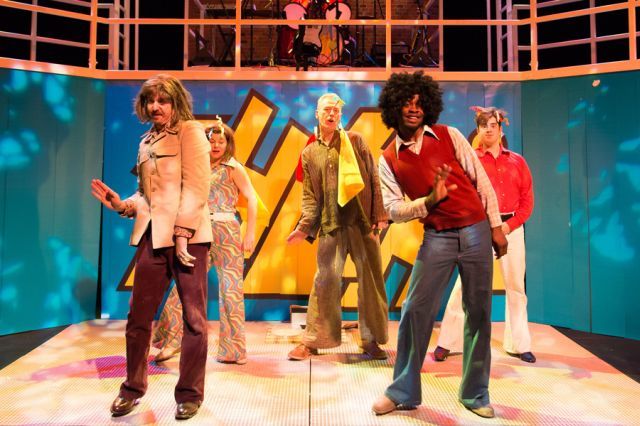 Never Try This At Home is a charmingly farcical, raucous 70s romp, as funny in parts as it is awkward in others.

Niall Ashdown is the presenter of a mockumentary, ‘looking back’ at a kids TV show from the 70s, Shushi. The action is made up of live action, 'pre-recorded' from the show itself. There are quirky over-the-top presenters and sample sketches from the show’s regular slots such as, "Look out, it’s the Pie-RA!", "Kick a vicar" and "Nobby’s Tool Time".

Quite clearly, this is not a show for the easily offended. But the humour, however dark, is more often than not spot on and rather hilarious. There are jokes about women, race, under-age sex — pretty much anything that could potentially offend. But however PC you are, the charm and dramatic delivery of the cast will most likely leave you laughing.

This is a clever, well-thought out production, despite some clunky changeovers and jokes that don’t quite work. It’s often awkward — but in the same way that Alan Partridge, Julia Davis or Kenny Everett are awkward; it’s almost certainly intentional and part of the overall drama and humour.

Some jokes are pure slapstick silliness. There are lots of custard pies being thrown, and some fantastic pieces of physical theatre in the form of a massive on-stage brawl involving the entire cast.

The fact that the show is 'pre-recorded' means that Ashdown is able to fast-forward, rewind and slow down proceedings to wonderful effect. The resulting slow-motion pie fight/stage brawl is delightfully choreographed, with a natural sparkle that you’ll remember long after leaving the theatre. However the, presumably part-improvised, interviews between the cast members of Shushi and interviewer Ashdown often fall flat, with strange tangents that are at times hard to follow. In other parts they work extremely well, the result overall a positive one, adding to the rawness and edginess of the production as a whole.

Behind the humour there are powerful messages about race, women and society in the 70s. It’s through these messages that Never Try This At Home has moments of touching social commentary, however over-the-top and silly some of the jokes are. The negative treatment of Petra Massey and Okorie Chukwu by the other cast members becomes more poignant as the abuse continues, and it’s clear that humour can often be used to mask genuine prejudices.

The cast is strong, with an exceptional individual performance from Petra Massey when she finally ‘snaps’, covers herself in baked beans and tries to hang herself live on TV. However sometimes things don’t quite gel between actors — but that’s to be expected with such a risqué, innovative piece. It’s well worth a visit. Just make sure you don’t wear your best suit if you’re planning on sitting in the front row…

Never Try This At Home is on at the Soho Theatre, Dean Street W1, until 27 April. Tickets £10-£20. Londonist saw this production on a complimentary press ticket.