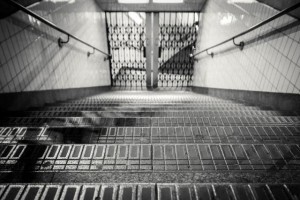 Two strike actions at Transport for London have been announced today.

Meanwhile, over 1,000 backroom staff at TfL have voted to strike over plans to freeze pay and cut final salary pensions. Manuel Cortes, the TSSA union's general secretary, said: "Needless to say, this plan does not apply to senior managers like the Commissioner Sir Peter Hendy who took home £650,000 last year".

TSSA members voted 80% in favour of strike action on a turnout of 47% — which, let's remember before politicians start talking about 50% limits again, is better than the 38.1% turnout for the 2012 London election. Strike action will be taken by supervisors and managers, so drivers and ordinary station staff will still be around to do their day-to-day jobs — unless they co-ordinate action with the RMT, which will likely mean fewer Travel Ambassadors available to fill in and run a limited service. [Edit: the TSSA says it won't do this. Damn our cynical brains.]

Photo by Alistair Beavis from the Londonist Flickr pool.