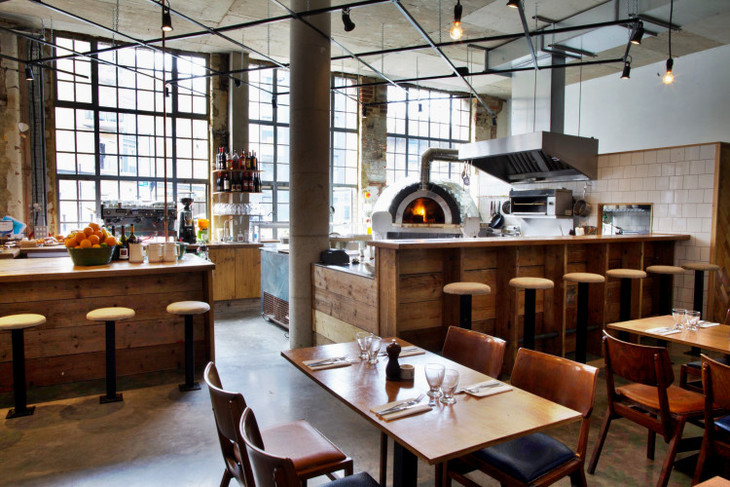 Set on a primarily residential stretch between the main thoroughfares of Kingsland Road and Mare Street, it’s not long ago that Lardo would be considered well and truly off the beaten track. Not anymore. With Rita’s a stone’s throw away, Rawduck about to open on the same street, and Broadway Market boosted by the likes of Peter’s Gin Palace and Hill & Szrok’s butcher and cookshop, the area is fast becoming a mealtime mecca. 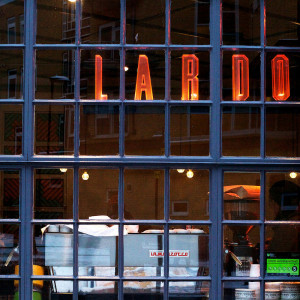 Lardo is far from your traditional neighbourhood Italian, but then again, London Fields isn’t your traditional neighbourhood. Candles in wine bottles, checked tablecloths and extra-large pepper grinders are given the boot in favour of an industrial warehouse-style space with a bare floor and art-clad walls, low-hanging industrial light fittings and communal wooden bench seating. A glistening behemoth of a pizza oven (quirkily clad entirely in old Italian barbers’ mirrors) is given centre stage in the open kitchen and takes the lead in terms of the restaurant’s cosy temperature and alluring smell.

Don’t launch into the pizzas straight away, though. Restaurants very often do best at what they say on the tin, and Lardo’s name references a much-loved Italian charcuterie made of cured pig fat. Although (somewhat strangely) lardo itself isn’t on the menu on our visit, speck, coppa and a particularly special and sprightly-favoured fennel pollen salami more than make up for it: meaty tasting rather than overly cured or salty, they melt slowly and sensuously in the mouth. What’s more, they’re all made on home shores by Gloucestershire-based farmers Ruth and Graham Waddington of Native Breeds.

The selection of antipasti also includes arancini: crispy, deep-fried rice balls stuffed with mozzarella and n’duja. If you don’t know that last ingredient, it’s pronounced en-dooya, is effectively a spicy, spreadable salami, and is almost certainly more addictive than any other substance that’s ever been consumed in the capital. In the arancini it deals in rich pepperoni-esque flavour, peddling its meaty notes throughout the keenly absorbent rice to create some Class A balls of brilliance that are a high-point of not just our meal, but recent eats. 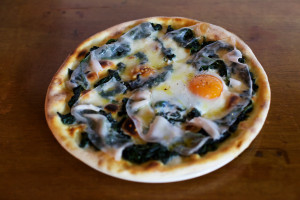 The pizzas do a good job of competing. From the glistening oven come crisp-bottomed but nicely chewy bases which set the scene for toppings including the namesake lardo along with spinach and a gooey-yolked egg, and another with our old friend n’duja. They’re big-flavoured, sturdy, generously topped and an all-round success. But not quite as addictive as those arancini.

Blood orange sorbet and some seriously rich Italian-style espressos round off a sweet, sweet taste of la dolce vita, while a wine list of less common numbers from Italy and elsewhere has a strong natural wine showing and is well worth a closer look than we managed. Given we’re already planning a return visit by the time that we make it to the bus stop, we’ll make sure we see to that. And at around a tenner a pizza and half that for antipasti dishes including charcuterie and those mighty arancini, thankfully Lardo isn’t too expensive a place to frequent.