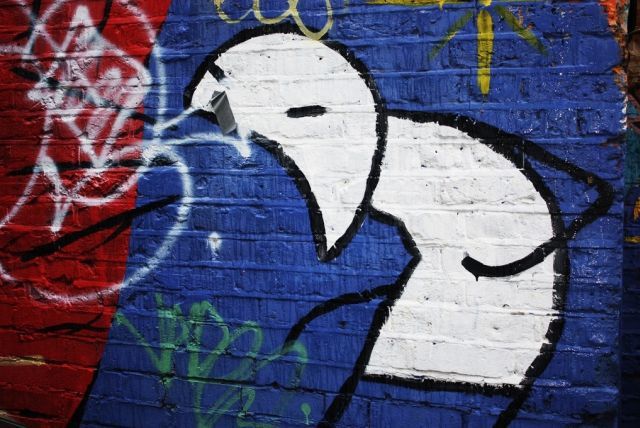 Londoners are an angry bunch, aren't we? We get riled by red lights and infuriated by inanimate objects. But are we letting the bile get the better of us when we should just chill out? Here are 11 trivial things which are guaranteed to make a Londoner angry.

1. Eating on the tube

It's funny how the prospect of a fellow passenger chowing down on a sandwich makes us want to break stuff. The Standard has questioned when eating on the tube became acceptable. And people seem to lose their cool when someone gobbles down a sandwich on the Central line on their way to a meeting. There are a lot of unacceptable things about the tube. People eating on it is one of the least of them.

The tube is a dusty, dirty place. Some of us also have colds which we've caught from those people who refuse to take a day off sick. Sometimes we need to cough or sneeze or clear our throats of tube dust. We can't help it and we're not doing it to annoy you so get over it and stop glaring at us. But give us a cough sweet first.

This covers a multitude of sins — walking four abreast while dawdling, looking at phones while walking, stopping in the middle of the pavement. Walking and looking at a phone are two mutually incompatible activities yet thousands of Londoners do it every day, seemingly relying on other pedestrians not to walk into them. What's so important that it can't wait till you've sat down somewhere? As for dawdling, anyone who's tried it in Canary Wharf's shopping centre between noon and 2pm will have experienced pedestrian rage — as the old adage goes, never get between a Wharfer and their lunch.

We've never quite got how the standard-issue earphones which come with smartphones and MP3 players can be so hopelessly inadequate. Or why our fellow passengers listen to such terrible music. But it infuriates us anyway because it's exactly the kind of noise which isn't loud enough to truly bother us but is just loud enough to be distracting. Next time you see someone on public transport who's oblivious to the annoying 'tst tst tst' leaking from their earphones, tell them they'll go deaf and wait for them to say 'what?'. Trust us, it's funny.

Whether it's on the train, on the platform or simply in front of the doors, not moving down is guaranteed to rile Londoners. Despite years of posters and daily tannoy reminders telling us to move down, we still congregate around the doors. Part of the reason for this is strategic — stand by the platform exit and you're more likely to get a seat as everyone in that carriage was there precisely because it was by the exit. But it's also down to not wanting to have to force our way back through the crowd of people congregating by the doors to get off the train, otherwise known as a self-fulfilling prophecy.

Like bad walking etiquette, not having your Oyster card ready for the barriers when you know you need it is trivial in the larger scheme of things but tremendously annoying for the people behind you. The reality is that the hold-up you cause is mere seconds but when mildly inconveniencing a Londoner can result in reactions ranging from the very British 'tut' to a full-scale shouting match, we think it might be better to avoid the stress and just have your damn card ready.

If Boris Johnson had set out to create a stick for his opponents to beat him with, then he couldn't have done better than the cable car. Spending millions in taxpayers' money to build a transport solution which links just two places, only one of which anyone really wants to go to, was never going to win hearts and minds. The only thing more annoying than the cable car is people moaning about the cable car.

8. Leaning on the poles

The poles are for holding, not for leaning. When you lean on the poles, you are preventing someone else from being able to hold it and it's just another of those aggravating things which people with no self-awareness do on public transport. It also means having to break the first rule of public transport which is never to speak to your fellow commuters.

Arguably not trivial, but always guaranteed to bring on the red mist. Whether it's cyclists selectively obeying road laws, taxi drivers who see a pedestrian crossing the road then accelerate madly towards them so that they can hoot their horn and make a big fuss, bus drivers blocking pedestrian crossings or traffic lights which only let two cars through, London's roads are one of the angriest places to be.

The other day we saw a group of shoppers nearly incandescent with rage because the supermarket doors had been closed for two minutes so they could be cleaned. Anything that holds us up makes us seethe, from delays on the tube to someone paying for a fizzy drink with a debit card. Just don't tweet TfL to complain as one commuter did, and got a sarcastic reply.

The list of trivial yet irritating behaviour which falls under this heading could be endless. To name but a few — spitting on the pavement, talking loudly on your phone in enclosed spaces, audible gum chewing, boisterous teenagers on the bus, misbehaving toddlers on the tube, people dropping litter, those weird scooter things you see a lot of in Shoreditch, not standing on the right — it just goes on and on.

What trivial things make you angry? Tell us in the comments.

Photo by Stephanie Sadler in the Londonist Flickr pool.