One In Five Tube Tickets Bought At Ticket Offices 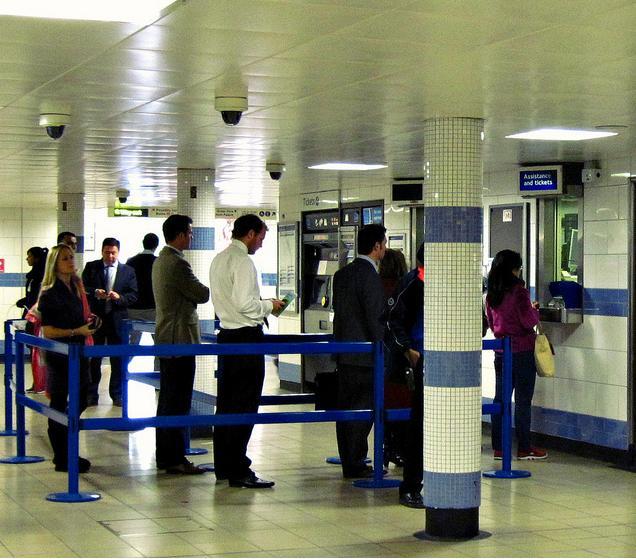 With Transport for London wanting to close all tube ticket offices, saying that just 3% of all tube journeys involve a visit to the little glass window, we're intrigued by this curious statistic. It was pointed out to us by commenter londona729 and taken from Transport for London's own website for its staff about the tube changes. It's an FAQ:

1 in 5 people (21%) still buy their ticket from the ticket office – what are you going to do for these people?

Interestingly, TfL doesn't attempt to refute the figure, instead saying it expects "these sales can be absorbed in other channels, such as ticket machines". Full Fact offers clarification on the 3% figure: apparently what TfL has done is work out how many ticket sales were made at ticket offices and compared that to the number of journeys taken. What it hasn't done is take into account the fact that many of those sales would be season tickets or Oyster top-ups, meaning that more than one journey may result from one visit to a ticket office. TfL has provided Full Fact with numbers that support the 1 in 5 statistic.

But people don't just use ticket offices for buying tickets. Figures obtained from TfL by London Assembly Member Val Shawcross show total ticket office transactions actually increasing by 0.13% between 2010 and 2013, indicating the need for a ticket office isn't waning despite innovations in technology. (But see the foot of this article for a response from TfL.)

We know some of the functions that can currently only be completed at a ticket office will be transferred to machines once a software upgrade takes place in the near future. What we don't know, and what we haven't been able to get out of TfL, is exactly what those functions are. (Edit: see below.)

In total, there were 7,573,351 transactions at ticket offices in 2013, an average of 20,748 per day. It's a number that's been broadly consistent over the last four years – as some needs decrease (people paying penalty fares, for instance, is down 95%) others increase (the number of people cancelling their Oyster cards at ticket offices has more than doubled). Val Shawcross said:

"These figures show London’s Tube Ticket offices are still widely used, with over 7.5million transactions last year alone. There are some interesting ideas in TfL’s plans and modernisation is needed, but Londoners should be given the chance to have their say and improve them. After all it is the public who use the Underground on a day to day basis and they will have to live with the cuts."

Closing ticket offices will lead to the loss of 950 tube station staff from current operating hours, though another 200 will be needed to staff stations during weekend all-night running from 2015.

However, the thrust of our article was that ticket offices are used for more than ticket sales, and that more than one journey can be made because of one visit to a ticket office. Gareth Powell, London Underground’s Director of Strategy, said

"It is wrong to claim that one in five Tube tickets are bought at ticket offices. In fact, less than 3% of all Tube journeys involve a ticket bought at a ticket office. That number continues to fall and will fall further when we introduce contactless payment later this year.

87% of Tube customers — or nearly nine in ten — have already paid for their travel before they arrive at our stations, with a season ticket, Travelcard or Oyster Pay As You Go, or travel for free with, for example, a Freedom Pass. The real picture is that sales at ticket office windows have fallen by 28% between 2010 and 2013. At the same time passenger journeys have increased by 13% and ticket machine sales have risen by a fifth."

What TfL's point seems to be, is that for every journey made on the tube, fewer and fewer people visit a ticket office because of increased use of ticket machines, Oyster, auto top-up and so on. However, that is different from looking at where people actually buy tickets when they need them. It's not that one in five journeys start with a visit to a ticket office, but that evidently one in five us prefer to buy tickets, as and when we need them, from a ticket office. (We've had further clarification that this is of people who buy their tickets at stations rather than online or at newsagents etc.) Make your own decisions about which measurement method you find most helpful.

We've also had some information about what the upgraded ticket machines will be able to do, which will reduce the need for people to use ticket machines for some of the other purposes outlined above. From later this year, the machines will sell paper tickets and Oyster PAYG, weekly and monthly travelcards and a range of National Rail tickets. All of them will be able to dispense Oyster cards. They will also be able to give Oyster refunds, and staff – helping customers at the machines – will be able to replace failed cards, give refunds for incomplete journeys, and administer Oyster discount entitlements.