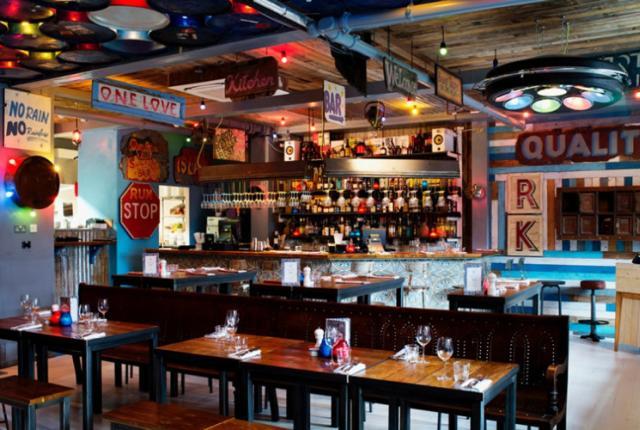 Shiny Kingly Court, the redeveloped shopping area close to Carnaby Street, isn’t where you’d expect to find a beach shack bar. But if you venture up to the first floor of this increasingly restaurant-packed space, then find one you will, tucked away just above Cha Cha Moon.
Rum Kitchen Carnaby is the younger sibling of the original Rum Kitchen in Notting Hill, which opened around this time last year close to Portobello Road and has been pulling in the punters ever since. Though the new spot is much further away from London’s spiritual home of Caribbean food and sunny rum punches than its Carnival-route first-born, it’s definitely brought that spirit with it.

Any external discretion is left well and truly at the door. Faux beach hut planks in shades of pale blue and white line the walls, offering up a playful look that’s about as Brighton as it is the Bahamas, but gives the idea all the same. Patches of corrugated metal and mismatched tiles ensure it’s all suitably random seeming; it was knocked together slowly over a few summer days while sipping on rum, you know. Well, maybe.

Assorted battered and bruised ‘look what I found on the beach’ signs, a boat hanging from the ceiling, and all manner of lost-and-found knick knacks add to the fun factor. And an assortment of bar-style seating, large communal tables and separate spots for two creates a casual, buzzy feel free from any restaurant formality. In fact, we’d rather think of it as a bar that does food.

In that vein, cocktails are the place to start. There’s a hefty book load of them, some classic and some new, all sharing one common ingredient: rum. Try a portion of Mama’s Guinness Punch for something far too laid back for most of London’s cocktail establishments; over-proof rum, condensed milk and Guinness are mixed with spices and chocolate bitters and served over ice to creamy yet refreshing effect. Slightly more conventionally, a Navy-style grog made with lime and ginger beer makes no attempt at disguising some seriously great rum, or at being anything but deadly, while a selection of daiquiris are also all about showcasing the spirit. We tried a classic mojito (don’t call us boring), and found it to be among the best we’ve had, thanks once again to some far superior rums than normally meet their fate with the mint leaves.

Moving onto solids, we sample the shack’s signature jerk chicken thighs and found them moist, tender and meaty with a pleasantly crisped-up bite to the skin. The restaurant’s built-in ‘jerk pit’, along with a well-practiced kitchen clearly gets good results, though we’d have liked a little more spicing to give that special jerk character.

We crave more kick as the night goes on, with succulent BBQ ribs lacking only the, erm, BBQ, and even the hottest sauce that came with perfectly crisp and tender squid rings being fairly tame. Especially considering it’s called ‘swamp’ and made with scotch bonnet chillies. Where has all the spice gone?

Thinking back to when we first arrived, our waitress – chatty, charismatic and every bit fitting of the feel-good environment – told us that the dishes are based on authentic Caribbean recipes but adapted for our British palates. Maybe the team have been watching this sketch from Goodness Gracious Me, as it would seem they think that these British palates are rather wussy indeed.

It would be unfair to call the food bland; it’s generally well executed, and a fish soup was full of rich, earthy shellfish flavour. But still, the level to which the spice has been muted is close to patronising. We live in a city where authentic Caribbean food isn’t that hard to find, and surely anyone wanting a toned-down version could ask for that?

Desserts such as sticky ginger cake or a chocolate pudding that could more accurately be described as a brownie are enjoyable but unexciting. A much better idea would be to finish with a glass of one of more than 15 available rums, and it would be the allure of these that will probably bring us back.

If you’re a fan of rum, then this is among the best spots in town to drink it, with good times all but guaranteed. Consider the menu to be bar food and you won’t go far wrong either, but as a destination restaurant we don’t think it quite stacks up. Oh, and if you do fancy a bit to eat, maybe bring your own chilli sauce…

Rum Kitchen Carnaby is at 1st Floor, Kingly Court, W1B 5PW. Disclaimer: We review anonymously and pay for all our meals/drinks.