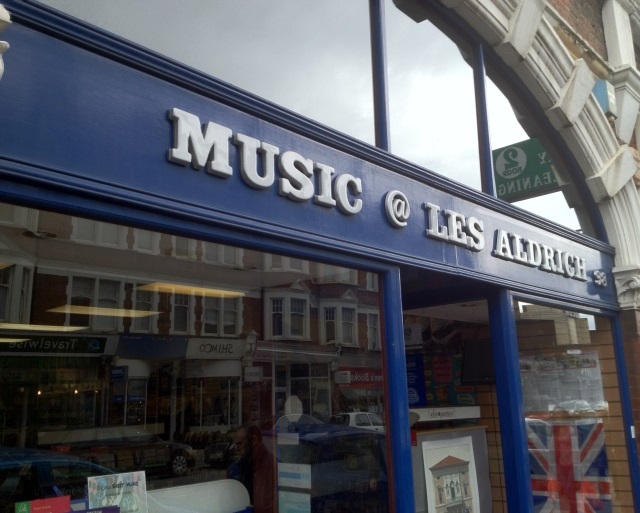 London has an embattled but resilient army of record shops bravely resisting the onslaught of the internet. Here we highlight the finest of those shops which focus on classical music, including sheet music.

Harold Moores Records, Soho
Almost certainly the most well-known of London's classical music shops, and for a reason. This Great Marlborough Street establishment offers CDs, LPs and DVDs of classical music old and new, with rarities aplenty and they also have an extensive collection of jazz. They will even buy any unwanted collections. The heroic general of the classical music shop army.

Gramex, Lambeth
Visitors to Gramex are made to feel right at home by the staff of this classical classic on Lower Marsh, near Waterloo. They specialise in second-hand classical, opera and jazz CDs. They also have a pop section, but don't hold that against them. YouTube has a superbly bizarre walkabout in Gramex, which includes these immortal lines: "I've gone to heaven." "Devon? Cream tea?"

Les Aldrich, Muswell Hill
The Les Aldrich Music Shop on Fortis Green Road has been plying its trade since 1945, although it claims to have its roots in Muswell Hill for over a century making it north London's oldest music shop. Les Aldrich sells sheet music, vinyl records and instruments, but classical CDs are their main concern. The shop was recently bought by Ian Rosenblatt, founder of the Rosenblatt Recitals series, and live music is often played in the shop itself.

South London Music, East Dulwich
Branding themselves a 'sheet music specialist', this shop on Grove Vale has been managed by local organist and conductor Rupert Perkins since 2006. They stock thousands of sheet music titles, CDs and DVDs, plus a large stock of instruments from violins to trumpets. They also sell online, but the shop is where the love for the music is strongest and south London has fewer finer classical outlets.

Islington Music, Islington
Islington Music on Shillingford Street is another with a wide array of both music and instruments. In addition to a large selection of CDs of less well-known classical music – and "a great selection of musical gifts from pencils to umbrellas" – they offer accessories for cleaning and tuning instruments, as well as the instruments themselves and an instrument repair service. Their sheet music selection is also extensive.

Schott Music, Soho
A few yards along Great Marlborough Street from Harold Moores Records sits in many ways its sheet music equivalent. The shop boasts more than 30,000 immediately available sheet music titles, in every style from classical and contemporary to rock, pop and jazz. They also offer classical and opera CDs, books and DVDs, but the sheet music is the key. Schott first established a London presence in 1835, and long may they last.

Classical Music Exchange, Notting Hill
This one certainly does what it says on the label. Part of the Music & Goods Exchange chain of shops, the Classical Music Exchange offers thousands of used CDs, vinyl, DVDs and box sets, with a hefty opera and ballet selection to boot. And of course they welcome anyone bringing in unwanted music to keep classical sounds in constant rotation.

Travis & Emery Music, off Charing Cross Road
Travis & Emery specialise in second-hand books on music, plus out-of-print rarities and a large array of sheet music. They claim to carry over 40,000 items in their Victorian-fronted shop, within the rarified confines of Cecil Court, a short walk from Leicester Square, and it's enjoyable to browse their fare and be transported back to a time before the shouty world of Twitter within this peaceful musical enclave.

Chimes, all over the city...
London's very own classical music chain! Chimes has four shops - in Marylebone, Barbican, Ealing and South Kensington. Helpfully their website tells us that all four shops are exactly the same, and also that they stock a good range of CDs, sheet music and instruments. Anything you can't find they will order in for you. The Ealing store was taken over by Chimes from Michael White on his retirement in 2011, and they are happy to carry on his 30-year tradition of instrument supply and repair.

Have we missed any out? Let us know in the comments and we'll get them added in.