A Ski Jump On Hampstead Heath 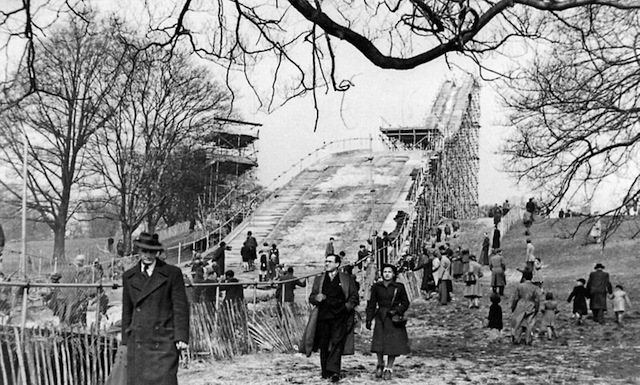 This is Hampstead Heath, March 1950. North London got its own miniature version of the Winter Olympics, in the shape of the country's first proper ski jump.

The attraction was built near the Vale of Health as a joint venture between the Ski Club of Great Britain and the Oslo Ski Association. Over the weekend of 24-25 March, thousands would flock to watch competitors hurl themselves off the end of the jump, to land in a giant bale of hay. London had never seen anything like it. 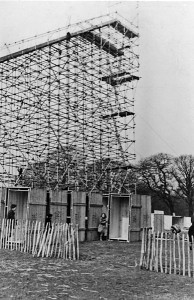 The snows of London have always been unpredictable, so the white stuff had to be imported from overseas. A party of Norwegian skiers brought with them 45 tons of snow, packed into wooden boxes and insulated with dry ice. This was transported to the Heath via refrigerated barges and lorries.

The jump was built from standard scaffolding and rose 18m high. The bamboo track stretched 30m downhill, with the red-tipped jump point 4m above the ground. The imported snow was then packed down on top of a base layer of straw. Despite the quantity, there wasn't enough to coat the entire platform, so a narrow channel was formed along the centre of the ramp. The resulting piste allowed skiers to reach speeds of 30-40mph.

25 Norwegian jumpers competed, followed by a tournament between students from Oxford and Cambridge. The competition was opened by the Norwegians' schoolboy mascot John Stoa, who flew 23m.

A commentator from the Aberdeen Journal describes the scene: "Down a frightening erection of steel scaffolding that looked like a fairground giant dipper, on skis and over a meagre carpet of rapidly melting Norwegian snow, the sportsmen hurtled at breakneck speeds — up, up into the air, then down again and headfirst into a crash barrier of snow."

And hay. One account, in the Yorkshire Post, relates that "...attendants had to run forward quickly with rakes to save the jumpers from suffocation. Often feebly waving skis rising from the hay gave the first clue to a competitor's whereabouts".

The crash landings can be seen in this fascinating video from British Pathe.

After dozens of spectacular jumps, a champion emerged in the shape of the 23-year-old Arne Hoel, normally a businessman from Oslo. He cleared 28m.

The event was extremely popular, attracting crowds of up to 100,000, some paying and some gatecrashing. Local traffic was brought to a standstill and the lifts at Hampstead tube station were unable to cope with the numbers. Those arriving on the platforms took 20 minutes to make their way to the exits. 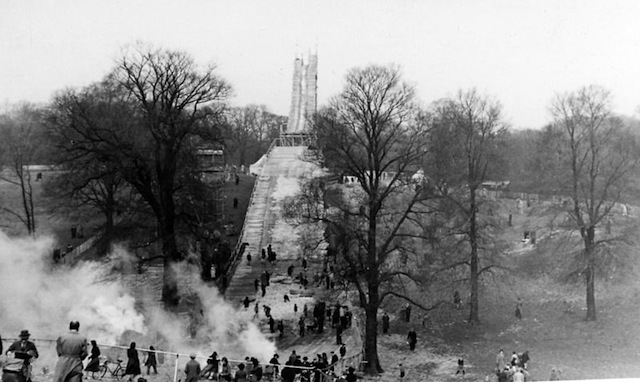 There were some fears that the unusually warm weather might scupper things. Hampstead was basking in an unseasonal heatwave, with some spectators 'quite happy in shorts and tennis shirts'. The steam of melting snow is quite apparent in the image above. But the event turned out to be a huge success, easily breaking even, if not a few limbs. The organisers and press soon started talking about the potential for an annual event.

Although many sources put the 1950 event as a one-off, it did indeed return the following year. This time round, the slope was 6m higher, and employed 15 tons of extra snow.

Sadly, the spectacle was devilled by heavy rain and a strong south-westerly, during what was then the wettest start to the year for 80 years. As the Yorkshire Post noted: "...before the proceedings had been completed, there descended such wild torrents of rain that people without shelter could hardly have been wetter if standing under the Victoria Falls."

Dozens of cars became stuck in a quagmire, and the whole event seems to have been a literal wash-out. Still, a few people did turn up to watch the returning Mr Hoel smash his previous best with a jump of 35.5m. This was respectable under the conditions, but a long way short of the contemporary world record of 124m gained on much higher slopes.

Curiously, although the snow was shipped free of charge, and transported by the skiers themselves, the 'big society' spirit was wrecked by British customs officials who imposed a 10% duty on the import — in effect, taxing water. The Dundee Courier opined that the duty "merits a high place in the records of bureaucratic idiocy".

Despite hopes that the jump might become an annual fixture, the 1951 washout ensured the ski jump never returned to Hampstead Heath. Yet this is not the only time Brits have enjoyed this spectacular sport at home. The Norwegians ran another demonstration in Edinburgh a bit later in 1951, hitting the same problems with customs officials. A smaller jump was erected in Reddish Vale near Manchester in 1960. Most recently, ambitious plans to build a ski-jump centre near Wrexham seem to have fallen through.

London had one final (for now) taster of the sport in 1961. This time, the venue was Wembley Stadium, where a precipitous scaffolding tower of 46m played host to teams from several European nations. 50 tons of artificial snow were used for this course.