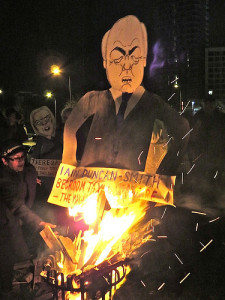 Figures revealed last week by Green Party AM Jenny Jones show that an average of 356 people claiming Jobseekers Allowance in London were sanctioned every day between January and September 2013.

Removal of benefits for alleged breach of DWP job-seeking rules (or sanctions) have increased dramatically. The Guardian reported in November 2013 that DWP statistics show a total of 553,000 sanctions between November 2012 and June 2013, compared with 499,000 between November 2011 to June 2012. The practice has been widely criticised as punitive and lacking in common sense.

Last week, we highlighted the link between increased food bank use and benefit sanctions. A Trussell Trust report identifies sanctions as one of the main causes behind the rise — between April and June 2012, 49,596 people used food banks compared to 152,154 during the same period in 2013. According to work minister Esther McVey, the extra sanctions are because people are just avoiding finding a job.

Despite denials from DWP secretary Iain Duncan Smith that job centre workers are given targets for sanctions, a work and pensions select committee report identified a 'target-driven' culture for getting people off benefits. Committee chair Dame Anne Begg MP said:

“People can leave benefit for a range of reasons, not all of them positive. JCP’s performance is currently measured primarily by the proportion of claimants leaving benefit by specific points in their claims. This takes no account of whether they are leaving benefit to start a job or for less positive reasons, including being sanctioned or simply transferring to another benefit."

An anonymous whistleblower also told the Guardian 'benefit claimants are being deliberately set up to fail in order to achieve sanction quotas without regard for natural justice or their welfare'. It's not that we don't believe there should be any conditionality around welfare, but applying sanctions for arbitrary reasons, or because of DWP errors, smacks of punishing claimants rather than helping them into sustainable jobs. In common with people being forced into temporary or emergency accommodation, the end cost to the taxpayer is far higher than it needs to be — sanctioned claimants are pushed into insecure or badly-paid work which then results in a new claim. Meanwhile, the ability to appeal unfair removal of benefits could be restricted even further — the DWP are said to be considering a charge for claimants to challenge adverse decisions.

Last year, internet magazine UsVsTh3m posted a quiz called 'Iain Duncan Smith's Realistic Unemployment Simulator' which trapped players in a round of Kafka-esque attempts to follow DWP rules and avoid benefit sanctions. We're not sure where they got the narrative from but given some of the experiences on this list compiled by a Birmingham campaign group, we think real life is a safe bet.

Jenny Jones described two cases to London mayor Boris Johnson where claimants had been sanctioned, cases which he described as 'shocking':

A constituent in Hillingdon, a 21 year old single parent, was accused of not doing enough to find a job, but the Jobcentre was unable to say what aspect of her job search was inadequate. Citizens Advice helped her overturn the sanction, but she still had to go three months over last winter without JSA or housing benefit, and had to get a crisis loan to pay the bills and feed her family.

A constituent in Lewisham was accused of not trying hard enough, despite exceeding her job search target. She lost her benefits for a month and was refused hardship payments or loans.

This kind of senseless short-termism around increased benefit sanctions has been criticised for needlessly causing hardship and poverty. Last week, 27 bishops branded welfare reforms 'a disgrace', with people going hungry in the world's seventh largest economy because of failures in the benefit system such as delays and punitive sanctions. And it's pretty hard to disagree with that.