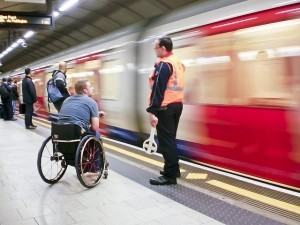 Transport for All has discovered that tube stations are becoming more inaccessible to disabled passengers because of staff shortages.

Step-free access stations use lifts, ramps or a combination of both to allow passengers to get to trains – but if there isn't a member of staff around to supervise, the equipment can't be used. Transport for All put in a freedom of information request to Transport for London to find out how often step-free access wasn't available and got back figures since 2008. In 2013 there were 162 closures totalling 500 hours because of staff shortages, compared to 33 in 2008 and 50 in 2009.

there are occasions when there is no staff member present with the necessary training for the lift to be in service. In some circumstances, for example where a member of staff is called away to attend an incident elsewhere, the lift must be taken out of service.

There are occasions when the step-free access closure only lasts a few minutes, and it's clear that TfL's scenario – of a staff member needed elsewhere on the station – fits. But when there are closures of hours, for example, Wood Lane on 27 August 2013 between 6.53am and 9.18pm, or Southfields on 30 March 2013 between 6.32am and 2.38pm, it looks more like a missing staff member where cover hasn't been found.

Step-free access closures because of staff shortages nearly trebled between 2009 and 2010 and stay much higher than in 2008 and 2009. There were job losses of around 1,000 within TfL during 2009/2010. We asked whether the two were related, and whether plans to further reduce staff could have an effect on step-free access in future, but apparently the song Silence is Golden is currently playing in the TfL press office and we've heard nothing.

Photo by Nigel Bewley from the Londonist Flickr pool.