Things To Do In London Today: Wednesday 22 January 2014

If you’ve not already done so, you can subscribe to these daily listings and have them delivered to your inbox at 7am every morning. Alternatively, subscribe to Londonist Daily to hear about events further in the future. And help spread the word to your friends who haven’t discovered us yet!

MP: A Parliamentary Open Lecture at the Houses of Parliament, led by Natascha Engel MP, looks at how the public are viewed from an MP’s perspective, as well as the general perception of politicians today. Free, prebook, 2.30-4pm

ANIMAL MADNESS: Dr Richard Barnett hosts a City Lit event, The Beast in the Mirror, examining the work of "mad-doctor" William Lauder Lindsay, who wrote about animal minds, covering ape neurosis and snake psychosis. Be quick though — at time of writing there were very few tickets left. £12, prebook, 6pm

LONDON’S STREETS: Join a panel discussion focusing on the potential for quick, cheap and temporary projects to speed up the transformation of London’s streets and public spaces, hosted by Movement for Liveable London at The Gallery, 70 Cowcross Street. Free, just turn up, 6.30pm

POOR BRITAIN: Jeremy Seabrook talks about his new book, Pauperland: Poverty and the Poor in Britain, at Housmans. £3, just turn up, 7pm

PANEL DISCUSSION: The Al-Mutanabbi Street Starts Here project joins intellectuals from all over the world to re-assemble some of the information lost in the 2007 al-Mutanabbi Street bombing in Baghdad. Dr Alan Ingram chairs this panel, which includes two of the projects contributing artists, printmaker Catherine Cartwright and political researcher Mona Kriegler. Free, prebook, 7pm

GIGS: Today’s music tip (we have a selection of them this week), as recommended by our friends at LondonGigGuide, is Rudy Blu, a Brixton musician, at the Old Queens Head, Angel. £7, just turn up, 7.30pm

COMEDY: It's the final night for one of our favourite sketch groups, Sheeps, who are performing new material at the Invisible Dot. £8, prebook, 9.30pm

PHOTOGRAPHY EXHIBITION: Darren Almond's new exhibition at White Cube in Bermondsey, To Leave a Light Impression, saw him travel to every continent over 13 years to take long-exposure shots of the full moon. Free, just turn up, until 13 April 2014

Drinking wine for charity you say? We're there. The Princess of Wales in Primrose Hill is hosting a Call My Bluff style wine-tasting evening (with cheese), with a prize for the winning team. The event supports The Winnicott Foundation, who raise funds to provide care for premature babies at St Mary's and Queen Charlotte's hospitals. £15, prebook, 7pm

Yesterday's clue was ‘General Charles George Gordon’. Today's is 'Dean Stanley'. What's the London connection? If you think you have it, email matt@londonist.com. Bonus points if you can guess it without googling. If you're reading this in the email version, check this paragraph on the live site to make sure nobody has beaten you to it.

On this day in 2011, we published this whimsical and very personal map of a newcomer's view of Bloomsbury. You can see the rest of the series here, including what your choice of dog says about your place in London.

This week's theme is ‘weird and wonderful sculptures of London’. Today, we salute the elegant Boy with Dolphin by David Wynne, which stands somewhat incongruously outside a car show room on the Chelsea waterfront. We include it here not only because it's a superb work of art, but also for the stories behind it. Wynne is a prolific sculptor, whose London work includes the similar Girl with Dolphin near Tower Bridge, and Guy the Gorilla in Crystal Palace Park. He was also very close to The Beatles and introduced them to Maharishi Mahesh Yogi. The boy in the sculpture is modelled on the artist's son, Roly Wynne. After frolicking with bronze dolphins, Roly went on to found Ozric Tentacles, a long-running psychadelic rock band who've released dozens of albums. Sadly, Roly committed suicide in 1999, and his life is now commemorated in a memorial at the base of the sculpture. You can find out more about the talented Wynne family in this interview, and on the excellent View From The Mirror blog. 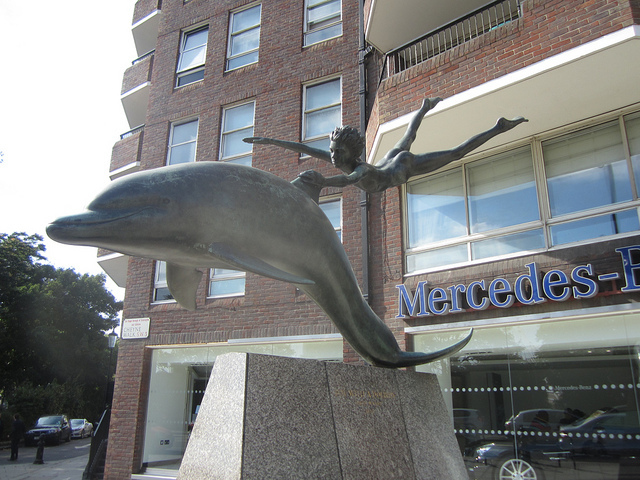 Previously: the most delightful sculpture in London, the infinite army of sculptures in Stable Market.