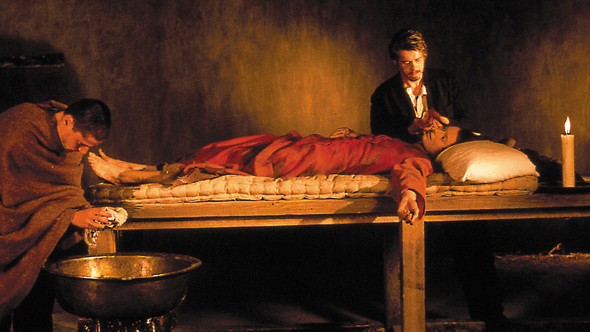 One of the most important and influential queer filmmakers of all time, Derek Jarman is to receive a two month retrospective of his films at BFI Southbank over February and March as part of their Queer Pagan Punk season.

Marking the 20th anniversary of his death, the key films for any Jarman novices will surely be the new digital restorations of his classics Sebastiane, a startling, sexual retelling of the infamous martyr, and Caravaggio, his biography of the Italian painter featuring early performances from Sean Bean and Jarman regular Tilda Swinton. Alongside these two more well-known films, a Season Introduction on 5 February includes his first film, Electric Fairy, thought lost for years, and The Queen is Dead, a short film made for The Smiths.

Also enjoying a rare outing on the big screen is Jubilee, a riotous account of the punk movement as experienced by time traveler Queen Elizabeth I and her occult aide, played by Richard O’Brien, soundtracked by Jayne County and Adam Ant. Toyah Wilcox is also on hand, alongside other collaborators throughout the festival, for a Q&A after BFI Southbank’s screening of The Tempest, in which she stars as Miranda. Anyone who remembers Julie Taymor’s recent ill-fated attempt to adapt Shakespeare’s romance will want to check this out. And for those still yearning for interesting interpretations of the Bard, it’s also worth checking out The Angelic Conversation, an austere paean to gay love given life by Judi Dench’s reading of the sonnets. A substantial overview to one of the UK’s most important artists, it’s certainly enough to fuel anticipation for the second half of BFI Southbank’s line-up in March.

Queer Pagan Punk begins on 5 February, running through into March, with additional screenings as part of this year’s London Lesbian and Gay Film Festival in March. Tickets can be purchased on the BFI website.