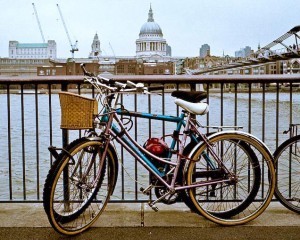 Transport for London has released its plans for a Central London Grid of cycling quietways and superhighways in zone 1.

Most of the document focuses on quietways, which make up 75% (60 miles) of the Grid. The superhighways section references the plans we've heard before, for east-west and north-south mostly segregated routes, or seem to talk about central London bits of other cycle superhighways. Clearly plans aren't finalised because TfL promises more details in early 2014.

There's an acknowledgement that quietways have been created to be used by more casual, or less confident, cyclists – there's an interesting phrase in the Mayor's introduction, describing them as cycling in "their normal clothes", perhaps to differentiate from lycra-clad commuter types. The quietways seem to be more a case of pointing out routes that are already there, but not often used. They'll be marked by signs painted on the road surface at junctions and for reassurance in between; there will be no blue (or any other colour) paint or segregation because, TfL argues,

because traffic is lighter and travelling more slowly, and there are fewer or no heavy goods vehicles, segregation will not usually be necessary on Quietway routes.

Cyclists will also be able to travel both ways on one-way streets, and junctions on quietways will separate cyclists from traffic physically or with traffic light phasing. There's even a move towards closing or restricting traffic on busier streets; Camden is apparently looking into the possibility of reducing or closing Tavistock Place and Torrington Place to traffic.

Camden is also dealing with the busy and dangerous Holborn gyratory by installing traffic wands (we don't actually know what these are – help in the comments?) in the short term. Camden, Islington and Hackney are also putting their heads together to find a solution to the heavily-cycled, but also generally busy, Holborn-Old Street route.

There's also a fair bit that's still up in the air. Parking is being left to the individual boroughs to take decisions on, and some sections of superhighways and quietways are still under discussion with boroughs and other authorities. We note that the map still boldly routes quietways through Hyde Park, despite the Royal Parks being adamantly opposed to superhighways through their green and pleasant, er, patch of town. And Boris's introduction references making use of towpaths, an idea that went down like a lead balloon earlier this year.

TfL wants your comments, so email grid@tfl.gov.uk by 14 February. You can also contact the relevant borough if you know exactly which one is responsible for the bit of street you're not happy about.

Photo by Randall Murrow from the Londonist Flickr pool