By M@ Last edited 102 months ago
M@ Santa's Lap: London On Film
Every day until Christmas we will be pointing you in the direction of a London-inspired Christmas gift that (with a bit of luck) you won’t already have on your list. Climb up onto our collective lap and we’ll see what we can move from our sack to your stockings…

It's been a glorious year for fans of London on film. The main highlight is the release of the trilogy of films by St Etienne and Paul Kelly. On one DVD, you can now see Finisterre, a homage to the post-Millennium but pre-Olympic London; What Have You Done Today Mervyn Day?, a semi-fictional tour of the Lower Lea Valley, around the time of the Olympic bid that would change it forever; and This Is Tomorrow, a more conventional documentary about the Royal Festival Hall. The collection, with a number of previously unreleased shorts, is available from the BFI. 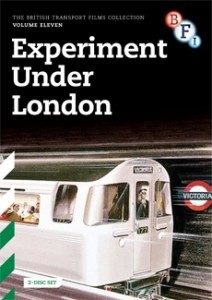 To mark London Underground's 150th anniversary, a selection box of archival footage has also been released by the BFI. London On The Move includes 13 short films from the 1950s to the 1980s looking at the rail and bus infrastructure of the capital. Our particular favourite is the information film for new inductees in the tube's staff canteens in 1951. Experiment Under London, meanwhile, focusses on the building of the Victoria Line in the 1960s, through each stage of the process. The classic black and white film Underground (1928) is also available.

For something a little more spooky, we'd recommend Ghosts on the Underground. This documentary was first shown in 2006 but is now out on DVD (at London Transport Museum shop, among other places). Yes, it's a little bit credulous in places (for example, this hilariously easy to explain story is actually given some credence as a potential haunting). But elsewhere, we get some genuinely creepy tales direct from the mouths of those who've worked alone in the tunnels at night. A surprisingly watchable stocking filler, and it's narrated by Paul McGann.

Speaking of McGann, everyone should own the complete Luther boxset, in which he plays a supporting role. Not only is it a gripping police thriller, but the series also uses (and sometimes abuses) the streets of London more than any other recent drama.