One Year On From Contactless Payment, We're Not Really Using It 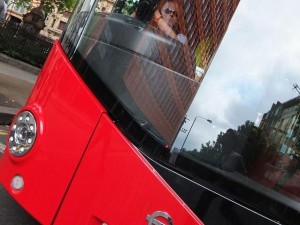 At the start of this week, Transport for London got very excited about the first anniversary of Londoners being able to use contactless payment cards on buses. Shashi Verma, TfL's Director of Customer Experience, harumphed:

It is fantastic that so many people are taking advantage of the ease and convenience of using their contactless payment cards to pay their bus fares. Each week we are setting a new record for usage which gives us great confidence for when we launch on the rest of the network and make contactless fully integrated next year.

In reality, it's not so marvellous. Around 33,000 bus journeys a day are paid for with contactless card technology. That's nearly half the 60,000 journeys that are paid for with cash, a payment method TfL wants to scrap. The London Assembly Liberal Democrats reckon each London bus gets swiped with a contactless card just four times a day (though it's very popular on the 38 and 73 routes).

The low current take-up of contactless would seem to herald a short-term reprieve for exchanging hard currency for your bus ride, as that was one of TfL's great white hopes for people who, for whatever reason, haven't got an Oyster card. Back in 2011, TfL was hoping to see 467m journeys on London buses paid for with 'wave and pay' in 2013/4; the last 12 months actually saw 6.5m journeys paid for in that way. So what's holding us back?

For a start, not all of us have a contactless bank card. Your author doesn't have one and has no idea when one may be forthcoming. And how many Londoners realise they can pay for their bus journeys with a contactless card? Consider this (and the video below) us helping TfL out with its marketing. But also – and we think this is the kicker, not mentioned in the video – at the moment you don't get a daily cap when you use contactless. If we're doing a lot of pay-as-you-go travelling that day, why would we choose to pay a single fare if it doesn't go towards a cap? That's just throwing money away. Plus you can't yet use contactless on any other form of transport so it's just automatic to reach for the majority method of payment (normally your Oyster card).

Perhaps we'll use it more as contactless technology becomes more of a fixture in our wallets and TfL makes it a viable alternative to Oyster. But right now it's a nice novelty for most of us.