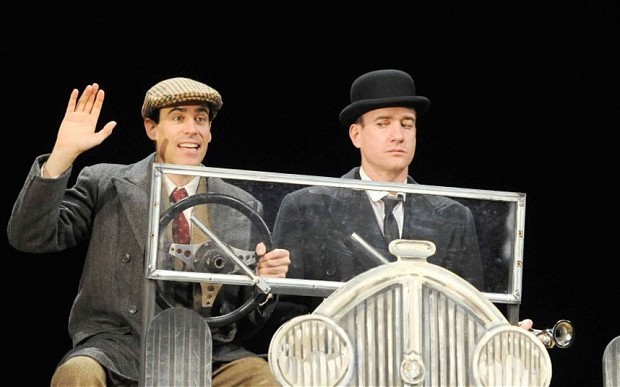 There's only so much farce the human body can take. After a certain amount of time (roughly the length of Meet the Parents) the eyes start to flicker, the heart races, and ultimately, catastrophically, the gallbladder fails, releasing a fatal dose of bile into the body.

What Londonist is trying to say is that we are wary of farce, and that it takes a keen sense of comedy to toe the line in such a way that it actually works. Though the Goodale Brothers' Jeeves and Wooster edges close to said line, it's self-aware and acerbic enough to get away with it.

Steven Mangan toothily plays Bertie Wooster, who's decided to put on a play based on his adventures from Code of the Woosters, which if you've not read it is scarcely worth recounting here. Matthew Macfayden plays Jeeves playing pretty much everybody else, except for when Mark Hadfield steps in. Three actors playing roughly fifteen million characters, then, and proving at every opportunity there's little funnier to the fan of the "gentle British comedy" than a man in a dress.

They're all pretty game, playing up for and to the audience throughout with little regard for a fourth wall, but honestly we're not sure whether the best bits are the authentic Wodehouse-ian parts or the bits that riff on the artificiality of the form (for example, Macfayden playing a blustering old man and his ingenue niece at the same time), and although they don't happen at the same time very often, these two sensibilities don't gel wonderfully.

Still: that's pretty much our only quibble, and it's a minor one.

Jeeves and Wooster in Perfect Nonsense is on at the Duke of York's Theatre until 8 February. Tickets are available via the ATG website.