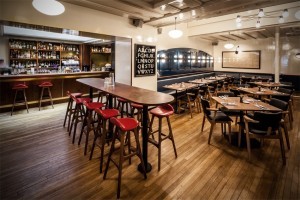 Even if the name doesn’t ring a bell, you’ll know about Foxlow already. It’s that new place from the people behind Hawksmoor.

When Huw Gott and Will Beckett opened the original Hawksmoor in Spitalfields in 2006, they were credited with making steakhouses cool again. Now four restaurants strong, steaks are all the rage across town and the pair could justly be described as the darlings of the restaurant scene.

Opening something different in Foxlow seems like a clever move. It allows expansion without over-stretching or devaluing the Hawksmoor brand (notice, we’re not calling it a chain), and allows the guys to play with new ideas free of the fear of tampering with a clearly winning formula.

Foxlow, which opened a couple of weeks ago on already-restaurant-packed St John Street shares the same key principles as its forefather: hefty helpings of good meat (from supplier Ginger Pig), great service and cool cocktails. There are some big differences, too. Foxlow is light and airy contrasting with Hawksmoor’s dark gentleman club tones; the setting feels a touch more casual; and the prices are slightly lower. Oh, and steaks are only a small part of the menu. We also like the fact that the design incorporates old London Underground tiles and an old mounted tram map.

Mains are where it’s at, and If mains at Hawksmoor are a steak affair, then Foxlow may as well be called the House of Rib. In particular, there’s the eight-hour bacon rib with maple & chilli, and the ten-hour beef shortrib with kimchi. The former comes with a fat content that can’t be far off 50% and has a sexy gelatinous swagger; never mind being melt-in-the-mouth, it’s practically melting just sitting on the plate. Served naked with sides all ordered separately, it’s at once rich and decadent, and basic and primal. The beef counterpart is soft, succulent and among the best of its kind our party has tried (St John Hotel just beats it). The earthy savouriness of the beef and its reduced juices are offset with sprightly kimchi, which is less of a shock to the system than it might sound, more a gently uplifting companion. Sides such as onions stuffed with sausage meat are equally as hearty and accomplished. There’s also a decent selection of fish dishes.

Desserts will always be tricky after such meaty mains, but a ‘peanutella’ nutty chocolate pot served in a jar with sweet toasts for dipping is a playful treat to make room for, while a selection of soft serve ice-cream sundaes (with added extras such as booze-soaked cherries) will cool away the meat sweats.

Starters are around £7, mains £16 and desserts £5 - even with a few sides added on that’s a pleasant comparison to big brother Hawksmoor where a steak can easily approach (or surpass) the £30 mark.

With a salad bar (although you can’t help yourself) among other starter options and soft serve ice-cream among desserts, one of our group said of Foxlow, “It’s just like Pizza Hut”. It isn’t, of course. But how brilliant that a proper restaurant serving bloody good, grown-up food can bring back feelings of that guiltily fun school holiday favourite. If Will and Huw decide to roll this one out, it could very easily be the next Hawksmoor.