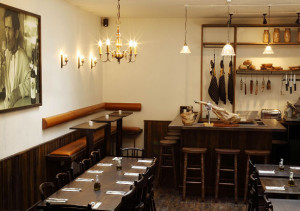 Fitzrovia is not an area short of tapas, ham or sherry. Even before Grandma’s favourite fortified tipple became cool and small plates were bang on trend, they had Fino; now they have Salt Yard, Iberica and Barrica, too. It’s from the same stable as the latter that Drakes Tabanco hails, the third sibling after Copita down in Soho.

If you’re wondering what the name is all about, a tabanco is a kind of tapas bar found in Jerez, Andalucia, where all sherry is made. They originated as unofficial ‘add-ons’ to sherry bodegas or wineries, but have evolved into stand-alone bars, usually serving predominantly sherry straight from the barrels. It’s Sir Francis Drake who is honoured in the rest of the name. He could be seen as responsible for kicking off the sherry industry in the UK when he returned home after a raid on Cadiz in Southwest Spain in 1587 with 3,000 butts of sherry. That’s some booze cruise.

We’re not sure Drakes has quite that much sherry on the premises, but it certainly brings with it the spirit of a rural Spanish bar by the barrel load. Albeit a rural Spanish bar re-imagined for a London audience. There are white walls, wooden floors, hanging hams and walls adorned with black and white photos of old Spanish men and women.

At the front of the restaurant is a bar area, which comes complete with five barrels of different sherries, including a nutty oloroso and a treacle-sweet pedro ximenez. It would feel more Spanish if it wasn’t scattered with Fitzrovia media types, but the idea that you can bring in a container and fill it up with sherry straight from the barrel is surely enough to coax out your Mediterranean spirit before you even head into the main eating area.

Much of the menu is tapas at its most tapas-y: olives, salted almonds, hams, cheeses, salamis and caper berries. It’s our first try of lamb prosciutto, it’s ripe with that unmistakable sheep flavour and melts slowly in the mouth; and prawns served with rock salt are as fresh, simple, full-flavoured and Spanish as could be. Best still, many of these dishes come in at less than a fiver, though the hams are obviously more.

If that’s all a little too unsubstantial, a scattering of main dishes are also available, including hearty stews of white bean and mushroom, and of octopus, chickpea and chorizo. Braised pig cheeks are a slow cooked and soft delight, cooked in (and full of the flavour of) that oloroso sherry from the bar. Prices here hover around £14.

We’d be surprised if there was another bar this side of the Channel where you could be served several different sherries straight from their barrels, so Drakes Tabanco wins plenty of points there. On the flip side, the sherry list isn’t as big as many of its nearby counterparts, and the food isn’t quite up to that of Fino or Salt Yard.

It might not be a revolution of the kind Sir Francis is used to, but what London has gained here is another relaxed, casual eatery with good drinks (there’s some Spanish wine and beer as well as the sherry); decent, well-priced food; and an atmosphere that lets you believe you’re on holiday for a few hours. We’re not complaining.