A round up of London books that landed on our desk over the past few weeks.

Note: links lead to the publisher's website. We recommend you buy these books in one of London's many independent bookshops. 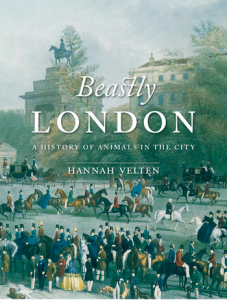 This history of animals in London is itself something of a beast, weighing in at almost 300 pages of A4 under a hardback cover. The narrative flies by, however, thanks to the author's ability to tell a story solidly and engagingly, without fuss or fancy, and with well chosen illustrations throughout.

Velten has a hawk's eye for detail, yet a magpie's wide-reaching taste. She's mined the archive to explain our city's long dependence on animals. The examples are legion. On the largest scales, we learn about  Smithfield cattle market and the logistics of driving so many animals through the crowded streets. We also get plenty of detail on the frenetic horse-drawn traffic of the Victorian era, and the vast service industries that built up around it. Among these famous examples, we also discover that goats and dogs were used to pull carts, and other beasts ran on treadmills to turn spits.

The book also details how animals were used for 'entertainment', such as bear-bating, horse racing, cock fighting, menageries and early circus stunts. Many of these sections relate harrowing tales of what we would now deem animal cruelty. Horses were whipped to exhaustion while dragging several tons of burden. Fighting animals were mutilated or weaponised to add horrific novelty to the battle. One fan of rat baiting decided he could dispatch more rodents than the customary dog, and set about with his hands and teeth.

Unless you go looking, pigeons and dogs are about the only animals you'll routinely encounter in the city centre today. Beastly London is an eye-opening reminder of how we used to live, and the creatures we lived with.

Working the London Underground From 1863 to 2013, by Ben Pedroche 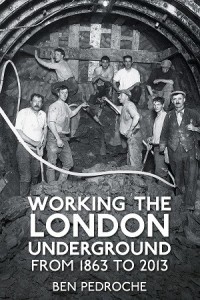 As the 150th anniversary of London's underground railway draws to a close, there's time for one final book about the network's past. However, rather than re-tread the same old story of speculative investors, much-celebrated architects and the singular contribution of Harry Beck, Ben Pedroche focuses on the stories of those doing the dirty work. From the navvies who excavated the early cut-and-cover lines to those who keep the system moving today, this is an appropriately bottom-up history of the tube.

The book is peppered with intriguing details, such as how (and why) every underground train once had two drivers. It is well illustrated with 60 photographs from the archives and the author's own tube adventures. A smashing little stocking filler for the Tube aficionado in your life.

Published by The History Press.

The Day Parliament Burned Down, by Caroline Shenton

First published in 2012, this sparky history is now out in paperback. It tells the story of the fateful night of 15-16 October 1834, when the Houses of Parliament were consumed in flames so intense they could be seen from Windsor. A simple workman's error led to the destruction of a whole complex of buildings that would today be Grade I listed.

Shenton, Director of the Parliamentary Archives, picks apart the events in exquisite detail, tracking the spread of the fire and the actions of those combatting it through each hour of the event. As the night draws on and the flames intensify, huge crowds gather to watch Parliament burn down. Among their number were JMW Turner, who sketched the conflagration and later made numerous paintings. The famous fire-fighter James Braidwood played a key role in taming the blaze and saving the medieval Westminster Hall. And then there are the many lesser-known figures who helped to save treasures and archives from destruction.

Shenton's account is detail-heavy, but nevertheless very easy to read. The catastrophe was so full of incident and implication that the anecdotes just keep rolling. Not everyone saw the fire as a great calamity. Eyewitness accounts describe plenty of celebration in the local ale houses. Architect Augustus Pugin is described practically rubbing his hands with glee at the huge rebuilding opportunity the blaze created. Peers and Members had long protested that new chambers were needed to accommodate the growing Houses of Lords and Commons. The fire settled the argument. In place of the jumbled congeries of buildings lost in the fire we now have one of the world's most famous landmarks. 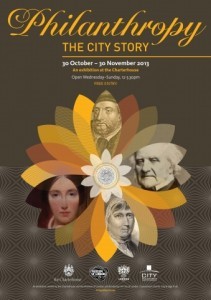 Timed to coincide with the ongoing exhibition at Charterhouse, this book takes a look at the past, present and future of charitable giving in the Square Mile. The opening section reminds us of the many famous names who bequeathed large donations to the needy: Dick Whittington, Thomas Gresham, Thomas Coram, Angela Burdett-Coutts, George Peabody and Charterhouse's own Thomas Sutton among them. Philanthropy is deeply embedded in London, with private wealth part-funding initiatives such as the City of London School, St Bart's and London Bridge itself.

Philanthropy: The City Story gives a richly illustrated overview of this long history, concluding with a map showing several dozen sites of note. The final chapter looks at philanthropy today, and recent initiatives to help the City's wealthy find constructive ways to invest their money back into the community. This section suffers in places from over-stodgy financial jargon that a general audience might skim, but it's certainly interesting to hear the modern context after the historical backstory.

Published by Sutton's Hospital. Available from Museum of London.