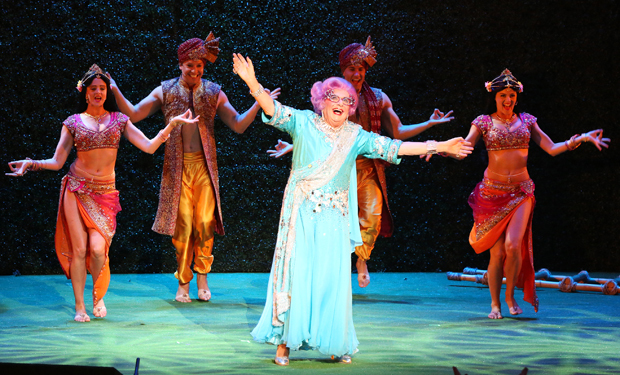 With boundless affection for Dame Edna herself, and despite a searing memory of being traumatised on an up-from-the-provinces 25th birthday outing when selected as one of her ‘victims’, it’s a privilege to touch again the hem of the rhinestone-encrusted garment at what feels like a canonisation, such is the esteem in which this toweringly fearsome talent has been held by a legion of fans.

Edna holds sway for the whole of the second half, having emerged from a ‘celebrity Ashram’ with new-age values and neatly spoofing the dire Julia Roberts movie Eat, Pray, Love while delivering a monologue that’s as savagely hilarious today as it was, in some parts word-for-word, at the Piccadilly in 1978. You could criticise this as recycling, but the genius of Barry Humphries is that while he has retained the format and some of the jokes, the longevity of the act rests on intelligent manipulation of the audience and a combination of ancient and ultra-topical material. Truly, in this respect, he is the last Vaudevillian.

Both Edna, and gloriously vulgar alter-ego Sir Les Patterson who introduces the proceedings have lost their precipice edge (although Les did squeeze in an offensive name for Jewish people which caused a small gasp), but the jeopardy which was always the thrilling high point of his work is occasionally substituted with not-always-comforting familiarity. The ‘victims’ in the front rows were entirely too willing and somewhat spiked Edna’s guns in their eagerness to confess details of their soft furnishings and fashion mistakes, and a routine in which she telephones the family of one of her volunteers was frustrated by a succession of voicemails. Live and unpredictable? Sure, when it works.

As a performance to crown such a scintillating career, the production values look a bit tacky: the garden-themed set is populated only by a pianist and four uber-cheesy dancers, not a worthy enough entourage for the original intergalactic megastar. The frocks are sparkly but they're comfortable shifts rather than the outrageous creations Edna has sported in the past, and it’s sad to see how Humphries now seems dependent on twin autocue-monitors planted downstage left and right: his characters were always about dangerous spontaneity, or at least the illusion of it.

It would be unfair to suggest the Palladium was stocked entirely with a Telegraph-reading Saga-travelling audience, but let’s say at the curtain call when a gladioli-flinging Edna graciously consented to photographs and tweeting, there weren’t many Nokia Lumias at the ready.

If you haven’t seen Dame Edna, you should, there will not be another in her or your lifetime. If you have, you should still see her to be reminded of her past glories and viciously accurate sense of humour. Most of the time.

Eat Pray Laugh!, the Dame Edna Farewell Tour continues at the London Palladium until 5 January 2014 then tours to Newcastle, Southampton, Norwich, Glasgow, Bristol (where Barry Humphries will celebrate his 80th birthday on stage), Leeds and Manchester. London tickets are £26 to £96. Some agencies do not offer the lower-priced tickets in the Royal Circle, so try the London Palladium box office in person, on 0844 412 4655 or its own website.