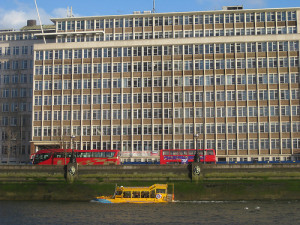 The September duck boat fire, which forced 30 people to jump into the Thames, is under investigation by the London Assembly.

According to a report by the Marine Accident Investigation Branch (MAIB), the London Duck Tours amphibious vessel Cleopatra caught fire after buoyancy foam contaminated with grease was 'most likely' set alight by the moving driveshaft nearby. Passengers were rescued by emergency services and other tourist boats.

Although the company still run London road tours, the duck boats have been banned from the river for the duration of the investigation. Managing director John Bigos says it's costing the company £12,500 per day, while asking for a swift response on new safety measures from the Maritime and Coastguard Agency. Another revelation from the investigation is that neither the crew nor passengers wore lifejackets, apparently not unusual for the type of boat.

Bigos says the company could be ready to start operating again in the new year, but perhaps unsurprisingly, isn't sanguine about their chances of attracting visitors in the same numbers, saying:

"Whether the passengers want to come back – and how we are going to get the branding sorted – is anybody's guess at this time."