Your relationship with the authors of yesteryear changes when you wander through their bedrooms. For years, we’ve carried their stories on the tube, stolen paragraphs between meetings, and allowed them to fill our homes. They know us rather intimately, so it’s about time we paid their London homes a visit. Freud, Dickens, Johnson, Carlyle, Conan Doyle and Keats have all wandered the capital’s streets, seeking inspiration and escape, and have left behind story-filled houses infused with their character and creations. These are the author’s homes you simply have to visit.


In a perilous, eleventh-hour flight from the Nazis, Freud arrived in London with his family in 1938, moving into a sizeable red brick house in Hampstead that he predicted would be his “last address on this planet”. Now possibly the most atmospheric of London’s museums, this enchanting house of dreams and deconstruction remains strangely little-known yet perfectly preserved.

The front study is quite something, filled with bronze, stone and terra cotta artefacts, collected from the antique shops of Vienna and referred to as ‘Freud’s friends’. He did, after all, link archeology to psychology, with his talking cure designed to uncover the layers of a patient’s psyche, ultimately arriving at the deepest, most desirable treasure. Brimming with books, furniture and a rug-covered couch, this is where Freud revealed the meaning of dreams, aided by the old and grubby gods.

This room is contrasted beautifully by a light-filled staircase (primarily the domain of the women of the house) that overlooks a quintessentially London street. With the top rooms containing intimate displays, and the sanctuary-giving garden looking lush all year round, this is a house of wonder and delight that plays host to ever-changing temporary exhibitions.

Author of some of the greatest poems in the English language, John Keats spent (and immortalised) a summer of intense happiness in a semi-detached house, with a shared garden and thin walls in northwest London. In Wentworth Place, designed to look like a single house along Keats Grove (known as Red Lion Hill before his rise to fame), Keats lodged with his friend Charles Brown, paying just £15 for the room and meals. Here he met Fanny Brawne.

As you wander through this house, with its low door handles and Keats/Brawne paraphernalia, it’s all too easy to imagine yourself in a time when Hampstead was a secluded village outside London, surrounded by fields, grazing cattle and gypsy encampments.

Sitting in Keats’ garden, filled with contemporary winter-sun-seeking poets and falling leaves, the poetic romance of it all is very much alive.

Listen to an episode of Londonist Out Loud at John Keats' House.

Wonderfully preserved and little visited (and now closed until March), Carlyle House remains largely hidden in Chelsea’s backstreets. Authentic and evocative, when you climb to his (almost) sound-proofed study and feel glad you didn’t need to cook in the meager kitchen, you’re walking in the footsteps of Dickens, Tennyson and Ruskin — to name a few. Once you’ve explored the home of this 19th century literary sensation you can take a five-minute stroll to the Chelsea Physic Garden and appreciate just how unchanging London can be.


Found in a cobbled pocket of London near Fleet Street, Dr Johnson’s house is a must visit. Purchased when he first gained the commission for his monumental dictionary, which took nine years to complete (considerably faster then his French competitors), this venue has seen its fair share of history.

In its heyday this architecturally charming house was filled with an array of literary, preforming, political and local characters – Dr Johnson was not one to turn people away. Today, walls of portraits and objects belonging to famous visitors remain. There’s the bureau of Elizabeth Carter containing her extensive collection of books, many of which she penned herself, and the costume chest of David Garrick; an actor who came to London with Johnson in search of fame and fortune and who was largely responsible for reviving Shakespeare.

There are also objects belonging to Johnson. An avid tea drinker (like any good writer), his pink tea set is on display, along with the cupboard that contained his singed wigs and a first edition dictionary – on display in the bedroom-turned-exhibition space.

The airy, topmost room, reached via a rickety staircase, was once Johnson’s intended study. Its top beams are now blackened from when the building was twice damaged by incendiary bombs and then, in 1944, by the blast for a V-1 flying bomb, which landed nearby. 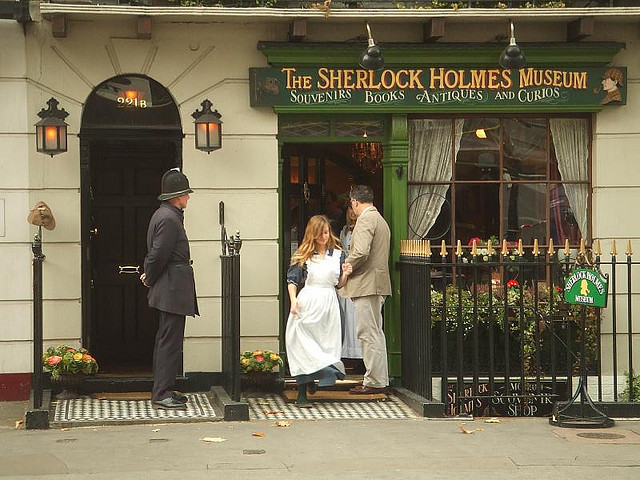 No London literary visit would be complete without a visit to 221b Baker Street. While Conan Doyle, one of Scotland’s greatest literary exports, set up residences (and an eye treatment hospital) elsewhere in the capital, Sherlock Holmes and Dr Watson called this Victorian treasure home. Though neither the location described by Conan Doyle in the books, nor in quite the correct place to be an actual 221b Baker Street, the building nevertheless carries a plaque to its fictional inhabitant, and has listed status thanks to its period charm. A first floor study overlooks Baker Street and is faithfully maintained for posterity in a Victorian style. Atmospheric, Holmes-filled, and with some seriously weird mannequins, here literature and real life intertwine.

See a map of every London location mentioned in Sherlock Holmes. 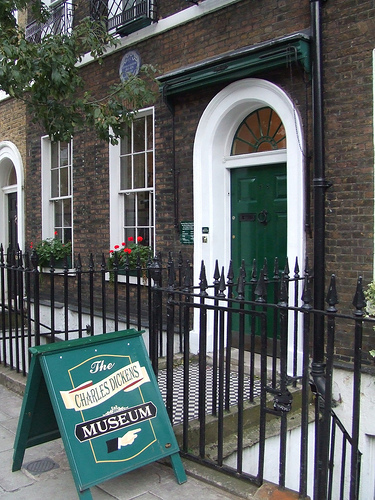 Few authors are as familiar with the streets and lives of the capital as Charles Dickens, so it makes sense that his quiet terraced home feels quintessentially London. This narrow house would have once been filled with the greatest literary minds of the day, with the Dickens family famed for their dinner parties (Carlyle was a frequent visitor).

In the first-floor drawing room, the largest room in the house, Dickens entertained in a most peculiar way. From an early age he gave improvised performances to visitors in his parent’s home and continued this as an adult, delighting guests with theatrics and staged readings — some of us never grown up.

The study is also fascinating, filled with a huge collection of early editions, which form part of the National Dickens Library. Likewise, the nursery and servant’s room (two figures meant to be seen and not heard…except in the pages of great novels) explore how a traumatic childhood experience of poverty and child labour shaped Dickens as a man and author. His bedroom has also been wonderfully preserved and it’s all too easy to imagine him dressing his long hair and reaching for his signature, colourful waistcoat.

Further out from the centre, the curious might also visit William Morris Gallery in Walthamstow, a former home of the great man. As well as a famous artist, publisher and designer, Morris also turned his multi-talented hand to poetry and novel writing, including the classic  News From Nowhere. Another Morris home, Red House, is open to visitors out in Bexleyheath. Charles Darwin's house in Downe can also be found in the extreme south-east of Greater London.

Images by M@ unless otherwise stated.