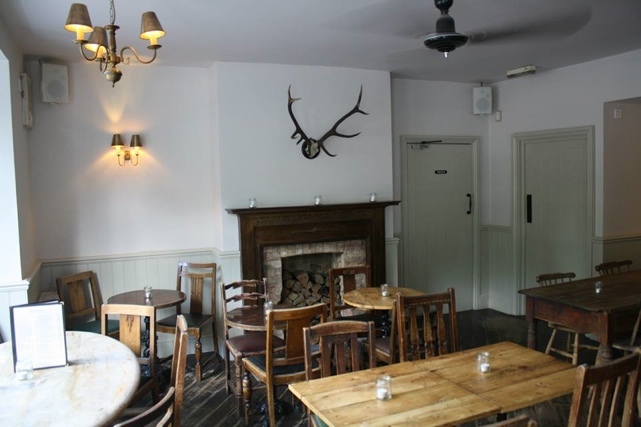 Just like many of the well-to-do families in the Islington area, new Highbury gastropub The Smokehouse is born out of good heritage. It’s the latest opening from small pub group Noble Inns, and has some of London’s best regarded gastropubs as siblings in the form of The Lady Ottoline in Bloomsbury, The Pig & Butcher in nearby Angel and The Princess of Shoreditch in, erm, Shoreditch.

If you’re familiar with any of those pubs named above, then you’ll have a fair idea of what to expect at The Smokehouse; just add a bit more fire, even more meat and an over-arching caveman approach to food. Well, at least that of a caveman with classic French training.

In terms of design, think pared back with lots of bare wood - including the obligatory gastropub standard sanded floorboards - and a whole side of the bar dedicated to being a proper “I'll just have a pint, please” pub rather than the foodie affair across the way.

The menu manages to be primal and sophisticated at the same time; British at heart, while international in inspiration. It’s far from cheap, but resoundingly reasonable; starters average a bit over a fiver and mains hover around the 15 mark until you get onto the really serious steaks.

Of our starters, a chopped brisket roll takes top spot: succulent strands of ever-so-slightly salty beef are encased in a croquette potato style breadcrumb shell and served with a slightly spicy, miso-esque Korean gochujang mayo. The rather ludicrous sounding foie gras, apple pie and duck egg, is only slightly less good. Two large seared strips of the ethically dubious goose liver delicacy are accompanied by a battered and deep-fried apple pie and topped with an almost-raw duck egg yolk. The resultant combination is wacky, but also creamy and silky. The not-as-out-of-place-as-you-might-think apple pie takes on the role a sweet wine or onion marmalade might more conventionally serve when paired with such rich a dish.

In the mains department, peppered ox cheek served with cauliflower cheese is close to the ultimate in cold weather comfort food. In fact, perhaps too much so - another texture on the plate certainly wouldn't have gone amiss. Still, the meat is soft enough to yield at the press of a finger, and the cauliflower cheese sauce unctuously creamy. The accompanying gravy is so dense and rich that it brings to mind Branston pickle. We can’t decide if this is a positive or negative attribute where gravy is concerned, but rest assured it went well with the cheese.

A dish of mutton chops, piled high and dressed with anchovies and parsley is surely this venue’s signature serve. The meat is smoky, flame-blistered on the outside and a soft, juicy pink within. There’s something of Fergus Henderson’s renowned St. John restaurant about the simplicity of the dish, and its use of harsh and basic flavours to create a sophisticated, if messy, plateful that goes down as well now as it no doubt would have in the Flintstones’ times.

We imagine that pudding is an oft-skipped course thanks to some mega mains, but the dark chocolate and caramel Friday Pie - complete with delicate, buttery pastry - is worth finding your second stomach for. It’s rich, so maybe share one.

While we’ll steer short of a blow-by-blow account of the meat sweats that followed our meal, it would be wrong not to mention the beers we enjoyed throughout. Doing nothing by halves, you’ll find that The Smokehouse offers more than 70 choices across taps and bottles, with a focus on some unusual options from America, Germany and Belgium, as well as a wide selection of Kernel, Meantime and Camden brews from a lot closer to home. Naturally, there’s a few smoked numbers, too.

So, if you fancy channeling your inner caveman (or woman), now you know where to head to get your rocks off.

The Smokehouse is at 63-69 Canonbury Road, N1 2DG. Visit their website here.