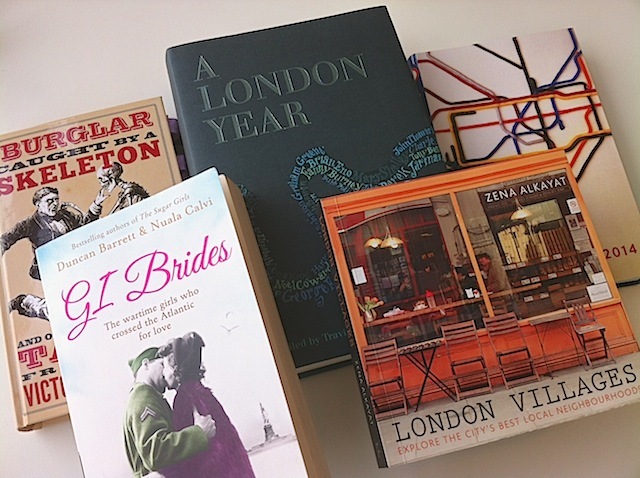 A London Year, Compiled by Travis Elborough and Nick Rennison

Bloody hell, this chap weighs a ton. A London Year, if your wrists can take it, is a sturdy compilation of diary entries from more than 200 writers. Over its 600 pages, you'll find personal London insights from the likes of Noël Coward, Kenneth Williams, Elizabeth Fry, Alan Clark, George Eliot and, of course, Samuel Pepys.

On the day of writing this mini-review (7 October) you can read the 1617 lament of the Countess of Dorset, going stir-crazy in her mansion while her 'lord' plays around; Ford Maddox Brown's descriptions of an 1854 cholera outbreak; and Tony Benn getting heckled by Black Power activists at a 1968 Labour meeting. In other words, this is London in all its complex diversity.

From what we've read so far (and you'll forgive us for reviewing this without having read every single page), the device of presenting several diary entries for each day, but from different years, doesn't really give a sense of London moving through the seasons. But it does throw up interesting juxtapositions, with people of various periods moaning about the same old shite. Actually, the overall impression we got is that Londoners do a lot of moaning, especially to their uncomplaining diaries. You'll learn to cuss the traffic or the weather in the slang of a dozen eras, and nod in agreement with the Georgian, Victorian or Edwardian diarist who bewails that London is not as good as it used to be. A £25 retail price (£16 on Amazon) gets you a near-priceless collection of insights, but you might also need to invest in a lectern to support this weighty bastard. Buy from publisher. Buy Amazon.

In the run-up to D-Day, tens of thousands of US servicemen poured into London. Many dated, and eventually married, local women. The so-called GI brides faced resentment and jealousy from homegrown suitors, long waits while their beaus were off helping to liberate the continent, and then feelings of isolation and culture shock when they eventually crossed the Atlantic to start new lives in the States.

GI Brides uses the same winning format as Barrett and Calvi's previous book, Sugar Girls. The pair conducted lengthy interviews with surviving GI Brides, then crafted the fruits into a series of narratives that collectively read like a novel but are, in fact, careful retellings of actual experiences. All four main subjects had a hard time of it, with unwanted pregnancies, and cheating, abusive or drunken husbands. There are many grim and even gruesome vignettes from wartime London, with horrific bombings and an attempted abortion. But the overall tone is one of triumph over personal adversity.

As with Sugar Girls, this is a treasure box of testimonies from a very different world, and one that will soon slip from living memory. Kudos to the authors for capturing these memories for posterity, and in such a readable, touching way. Buy direct. Buy Amazon.

It's often observed that London is really a collection of small villages. Many are, or were, bona fide villages subsumed by the growing capital — places like Hampstead, Highgate and Dulwich. Others are areas of central London that have developed a village-like vibe. This new book collects them all together, offering an attractive survey of London's cutest quarters.

It's not a book for anyone with a beef against gentrification, or recent coinages like Steele's Village, Connaught Village and (somewhat absurdly) Whitecross Village. Suspicions can linger behind such sobriquets, with some examples artificially foisted on an area by marketeers, property agents and business groups. Yet it's undeniable that all these areas do have a certain character and, to many, a charm. If you enjoy wandering around attractive markets and artisan shops, then this is a decent guide that points out the best independents and eateries in 30 different 'villages'. Guaranteed, you won't have discovered every enclave presented in the book — from Abbeville Village to Victoria Park Village. Buy direct. Buy Amazon.

The Burglar Caught By A Skeleton, by Jeremy Clay

Jeremy Clay, we're informed by the author blurb, 'lives in Leicester with his family and a dog with a passing resemblance to Denis Healey'. Such surreal levity sets the tone of his book, which presents a miscellany of curious tales from the Victorian newspaper archives.

While the volume covers singular tales from all over the place, London features most heavily. The publishers, bless 'em, made life easy for us by tagging up all the entries concerning London, and there are some corkers. There's the Soho pub where a man choked to death on a billiard ball (we did some further probing and it turns out to be the Carlisle Arms on Bateman Street). There's the actress shot in the neck while demonstrating a bullet-proof vest (don't worry, she was 'progressing favourably' at the time of the news cutting). And, less fortunate, the Kensal Green coffin-bearer, killed after falling under the coffin.

In short, a peculiar fruit bowl of curious tales, many presumably unseen for over a century. Buy direct. Buy Amazon.

Not much to review here. It's a diary, with pictures of famous Tube posters and a few transport-themed quiz questions dotted around here and there, timed for the tail end of the 150th anniversary of the Underground. All very nice, and would make the perfect present for the Londonophile in your life. Out now from Frances Lincoln. Buy direct. Buy Amazon.