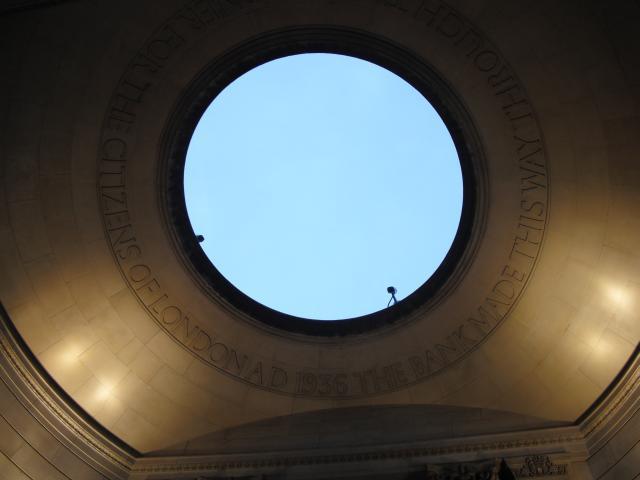 Tom Chivers is running five Walbrook Pilgrimages, walking the buried river as he uses poetry, soundscapes and storytelling to reveal the hidden histories and geological landscapes beneath our feet. It came out of Tom's ADRIFT project, exploring the city through poetry, and which he's turning into a book. The pilgrimages run 2-6 October, various times, £10, as well as a reading at the Guildhall on 9 October. Here's a glimpse into what you can expect...

Tivoli is a small town on the edge of the Sabine hills near Rome, best known for the ornamental gardens of the Villa d'Este, laid out in the 16th century. So celebrated were these gardens that Tivoli leant its name to a public park in Paris, and subsequently to pleasure gardens in Copenhagen, Tokyo and Ljubljana, Slovenia. Tivoli had gone viral, spawning clones all over the world: theatres, football stadia and even housing estates. Tivoli became a kind of global brand name for pleasure, leisure and green-fingered civility.

In 1805 Sir John Soane, the architect responsible for the rebuilding of the Bank of England, completed his own, typically idiosyncratic, contribution to the craze: his Tivoli Corner, a spherical enclosure tagged on to the Bank at the junction of Lothbury and Prince's Street. It is a tomb-like, functionless space enclosed with weighty neoclassical columns and it can be entered from the north or west. Its roof is a portal, open to the sky, around which is carved a dedication to the citizens of London. (Though today a CCTV camera is stationed ominously at the opening. The citizens are, it says, not to be trusted after all.)

Soane was an obscurantist. His design was not modelled on the gardens of the Villa d'Este, but on the Temple of Vesta, which he had visited as a young man on the Grand Tour of Europe. This circular shrine to the Roman fire goddess was built in the 1st century BC, and stands above the town of Tivoli on a promontory or acropolis. Beneath, the Aniene river gushes out from the Sabine hills in a series of waterfalls; now dammed, their energy harnessed, these falls light households in Rome. Vesta, fire goddess, would like that confluence of fire and water. And perhaps Soane was thinking of the Walbrook as an Amiene stand-in; two rivers barely contained by the earth. The original Temple was, like most of the famous monuments of Rome, shaped from travertine: a limestone produced by hot springs which is quarried from the hills around Tivoli. A stone that was used to tile the floor of the tower at Broadgate and for the circular altar in the circular church of St Stephen Walbrook.

Tivoli Corner is an enigmatic structure, a place one might linger - but not for long. Once, entering this space, a pyre of half-smoked cigarettes had been constructed on a ledge; another time, it was empty quarter litre bottles of vodka. Into one wall a lockable metal box is set like a safe or a secret door, a way into the Bank. It is too tempting not to try your house key in the lock. According to his biographer Gillian Darley, Soane 'delighted in 'lesser' spaces – vestibules, corridors and alcoves'; seeking 'illumination from hidden sources, harking back to the Roman subterranean regions... Soane saw Tivoli Corner neither as entrance nor passage'.

To step inside the frozen time-capsule of Soane's London home (now the Sir John Soane Museum) is to enter a mind wired by the neuroses of making and unmaking, of the raised and the ruined. Amongst the artworks Soane commissioned is a landscape painting populated by each of his buildings to be constructed: an entire city of his own making. More surprisingly, a companion piece gathers every structure that was not realised: monuments, mansions and palaces that remained as lines in the architect's sketchbook. A city of the undone, like Wren's geometric designs for a new London streetplan. Soane's Bank receives its own weird memorial: an isometric projection of the entire complex reduced to a crumbling ruin. This, I think, is the real meaning of Tivoli Corner. Soane appears to be, simultaneously, paying homage to and undermining the power and forms of classical Rome. The ruined temple stands reconstituted inside the new temple of a new empire of trade... like a glitch, the nagging thought of its inevitable decline. Here in this architectural oddity or joke, Soane performs a Roman pastiche in a once Roman city: he has erected a folly at the heart of capital.

The pilgrims leave by the western exit. One has lit a candle to honour Vesta. I am already far ahead, at the south end of Prince's Street. They pass, on one side, an eliptical sign fixed into a recess on the wall: the only marker of having passed through the invisible boundary of the Ward of Walbrook. On the other side of Prince's Street, I can barely make out the remains of another sign. The letters H-S-B-C traced as off-white lines against the smog-darkened stone of the wall: a reverse branding where the metal logo has been ripped off. There is more to connect these two waymarkers - one a whole millennium in its making, highly localised, the other contingent, internationalist and of no one place - than you might think. For the current alderman of Walbrook, Jamie Garbutt, is also Head of Global Governance at the Chinese banking conglomerate.

The street records all losses.

The crossroads at the south end of the Bank of England, where Bank tube station riddles the ground like so much unravelled intestine, marks the col between Cornhill and Ludgate Hill cut by the Walbrook as it approaches its mouth. Here the culverted river once passed underneath the Wren church of St Mildred's, demolished in 1872 to make way for the tall neoclassical banks and office buildings that now dominate the junction. (An earlier, Medieval incarnation was destroyed in the Great Fire of 1666.)

The geography seems more immanent than at any point in the journey. It may be the slightest of gradients but the view of Cheapside rising towards St Paul's in the west is unmistakeably that of a hill seen from a valley bottom. A market for chicken and geese was once held here, and the lower reaches of Cheapside are still known as Poultry. I head towards a pink and yellow striped building jutting out into the confluence of Poultry and Queen Victoria Street. Its tubular clock tower resembles the funnel of a steam ship and its limestone flanks, as I approach, are peppered with circular windows: portholes, or portals. I enter through a passageway, out of the sloshed weather, and into an atrium, unroofed, a silent mausoleum open to the sky.

Words and photo by Tom Chivers.