Tightropes Over The Thames: A Precarious History

By M@ Last edited 10 months ago
M@ Tightropes Over The Thames: A Precarious History

Looking back at acts of death defiance over the Thames.

Every September since 1997, Londoners have come together to celebrate their river in the Thames Festival (now known as Totally Thames). The first festival featured a daring duo who walked over the Thames on a tightrope. But the pair were not the first to take a highwire over the river.

The first reference (requires subscription) we can find to a tightrope crossing of the Thames came in 1842, when a Signor Duvalla twice walked across a 90 metre-long rope next to Windsor Bridge. He later announced what one commentator called a "similar silly ascent and descent" from Home Park to the round tower of Windsor Castle. There is no record of any such attempt. 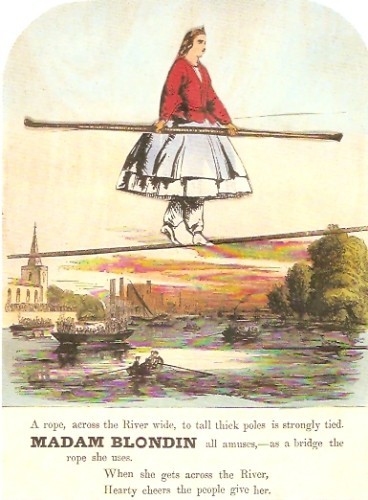 Selina Young, dubbed 'the female Blondin' or 'Madame Geneveive', traversed a 600 metre rope across the Thames from Battersea to Cremorne Gardens. She performed the feat five times, to audiences of around 2,000 people, taking about seven minutes to make each crossing. Here's a rather nice zoomable image of one such occasion.

A newspaper report of the time opined that "her performance is apparently fraught with little danger, for she crosses the rope with an ease, freedom and self-possession that is truly astounding". Gossip columnists were less impressed. "Really we are very inconsistent people," said one anonymous hack. "We crowded in thousands to watch the male Blondin risk the certainty of breaking his neck in case of any accident [he'd recently appeared at Crystal Palace], and we throng in tens of thousands to witness a feat the failure of which would merely entail a ducking. I wonder the "sensation" seekers did not stigmatize the whole affair as 'very paltry, quite insipid, in fact!'".

Perhaps she took it to heart. A year later, Young suffered a serious fall while attempting cross a highwire over ground at Highbury Barn. Having already traversed the line in a suit of armour and pushing a wheelbarrow, the astounding lady next attempted the crossing while clutching a balancing pole loaded with lit fireworks. The pyrotechnics exploded asymmetrically, throwing her off balance. She fell 20 metres to the ground, breaking her neck and thigh. The accident left her a "mangled cripple", in the graphic parlance of the time, and she apparently never performed again. 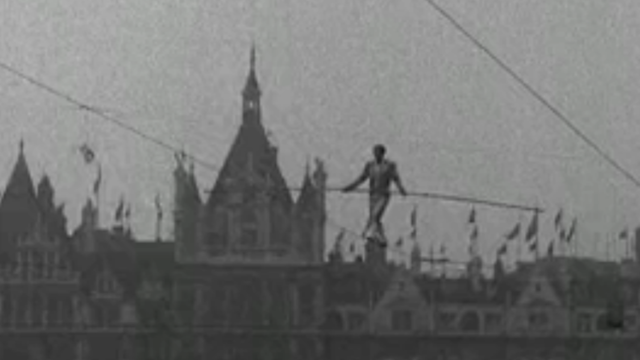 100,000 people crowded onto the embankments to watch a moustachioed tightrope walker named Elleano cross the Thames. A veteran of similar stunts over the Rhine, Danube and Elbe, the 40-year-old Frenchman became the first to complete the London crossing in almost a century, and the first man to do so in central London. The feat took place near Hungerford Bridge as part of the enormously successful Festival of Britain. Towards the end, Elleano slipped, going down onto one knee where he remained for four minutes before continuing his walk. You can see a film of the tightrope walk on the British Pathe website. 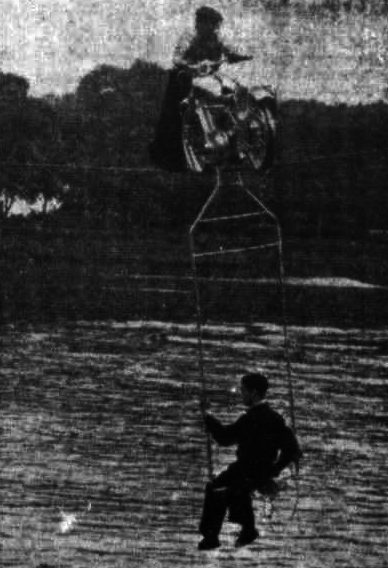 Another crossing between Battersea and Chelsea occurred in 1954, when brothers Alphonse and Charles Bugler of Hamburg (also known as the Air Pirates) traversed the Thames on a motorbike and dangling cradle, then made the return trip. A few photographs of the stunt can be found online, including some showing the motorcycle being pushed by Alphonse following a stall. Sadly, we can find little else about this remarkable trip, so do share any information in the comments below. 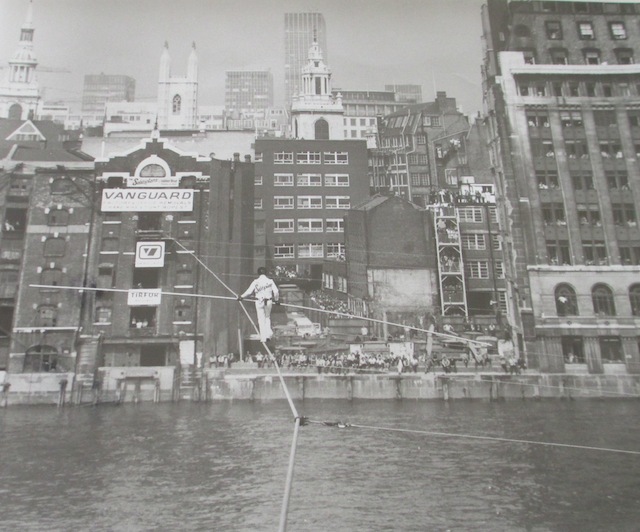 This never-before-published photograph shows German daredevil Franz Burbach crossing the Thames in 1972. This was Burbach's second attempt. A year earlier, he'd dropped his balancing pole and followed it into the water. Undaunted, he returned in 1972 with a new pole and steel cable, successfully completing the crossing to cheering crowds. His attempt was almost disrupted when an attention-seeking lady jumped onto the cable at the southern end. After dangling for a few seconds, she plummeted into the Thames and Burbach carried on.

The photograph comes from the archive of Vanguard Storage, who helped install the cable between Bull Wharf and Bear Wharf (just to the west of Southwark Bridge). The image shows several warehouse buildings, now demolished, and a series of 1960s skyscrapers which have also since vanished or (in the case of the tallest, CityPoint) been reclad.

A short newsreel video of the crossing is available on MovieTone. 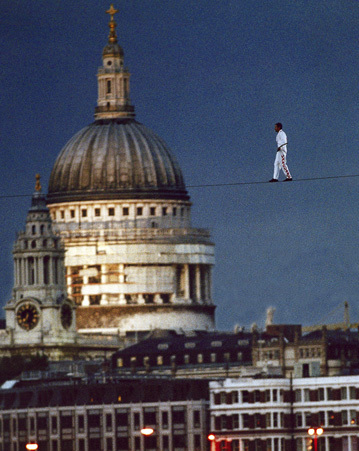 The last acrobats to cross the river by tightrope were Frenchman Didier Pasquette and American Jade Kindar-Martin during the first ever Thames Festival. The 50 metre-high steel wire spanned the river between the OXO Tower and HMS Wellington on the Embankment, a distance of a quarter mile. To make the feat even trickier, the pair started at separate ends and crossed over in the middle. The equipment was once again provided by Vanguard, who also supplied the photo above.

Although we can find no other accounts of Thames crossings on a tightrope, a number of related stunts have taken place across the years. In 2011, Blue Peter presenter Helen Skelton famously walked between the chimneys of Battersea Power Station, next to the Thames. A 71-year-old Karl Wallenda walked out alongside the Thames near Tower Bridge in 1976, but the wire did not cross over. Wallenda, patriarch of a daredevil family, fell to his death in Puerto Rico just two years later. Finally, Mayor of London Boris Johnson famously came a-cropper while dangling from a wire in Victoria Park in 2012.

Now, who's going to be the first to walk over the Thames using the cable car wires?