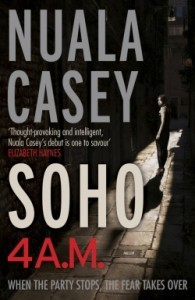 Soho 4AM by Nuala Casey

This marvellous debut considers the lives of four people on one night in Soho. But not just any night in Soho. It is 6 July 2005 and London has just been selected to host of the 2012 Games. We're introduced to Zoe, the naive aspiring model; Seb, the alcoholic artist; Ade, the frustrated musician; and Stella, his increasingly alienated girlfriend. Anyone who's spent a night prat-falling from one Soho misadventure to the next will feel at home with these characters. Each needs an arm around the shoulder, and the words "No, just go home now. Trust me". They don't get this advice, of course, and their evenings deteriorate while the rest of London parties. The night goes on. Another drink leads to another punch-up. A raised hope becomes a crushed dream.

At its most basic reading, Soho 4AM is a deftly written character piece — it's tempting to describe it as a novelisation of Pulp's 1995 album-closer Bar Italia, with characters falling in and out of drinking dens getting increasingly broken. But two facets elevate the story above similar books. First, this is Soho red in tooth and claw. The locations are oh-so-familiar, with Ronnie Scott's, The Dog and Duck and, yes, Bar Italia, all making lengthy appearances. A Sohemian supporting cast of thousands drift around in the background — bawds and binmen, suits and tourists, drunks and dealers.

But secondly, saliently, there's a brooding horror underlying and magnifying everything. We have knowledge, right from the start, that the characters lack. For dawn is coming, and then the date will be 7 July 2005...sometimes written as 7/7. However bad the night, there can be no happy ending.

Buy on Amazon; buy from publisher. Review by M@. 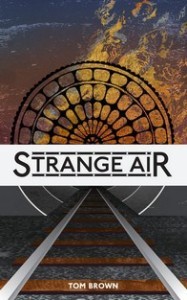 Secret underground railways moved by pneumatic power, mysterious fires at Crystal Palace and a group of skeletal commuters intent on revenge. What a peculiar and wonderful novel Strange Air is. Two tales intercalate: former Tube driver Eric runs into a spot of sepulchral bother while wandering around modern-day Crystal Palace Park; back in the mid-19th century, Thomas Webster Rammell is trying to convince the great and the good to invest in his pneumatic railways. Eventually, improbably, and yet brilliantly, the two disparate tales converge.

Genres collide as the author mixes historical fiction, science fiction, fantasy, horror and a healthy dose of geeky transport research to pull off a true page-turner, whose ultimate outcome is as unpredictable as a blindfolded interchange at Earl's Court. If there's one criticism, it's the ease with which the characters accept the supernatural elements. Some genuinely creepy build-up loses its edge with hasty acceptance. But don't let that put you off. This is an ingenious and gripping novel; self-published, but paced and edited like it's been through a big publishing house. And if there are any big publishing houses reading...perhaps give this one a look-see.

Buy on Amazon. Review by M@. 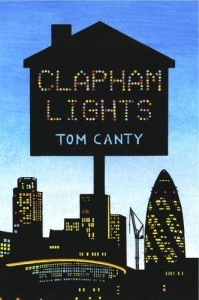 Characters in novels are supposed to be likeable, right? We're supposed to empathise with them, feel their joys and pain. Tom Canty deliberately chucked this idea out the bay-fronted window when he created Mark Hunter, perhaps the biggest cockend in fiction this side of Martin Amis. Mark works in finance on the eve of the credit crunch; he spends obscene amounts of money on terrible drinks, shirts and food, and lives in an overpriced Clapham flat with his old university buddy Craig. This hapless chap works for the kind of estate agent that makes whoever rents out these properties look reputable, and is being shafted in a very similar way to the clients.

Clapham Lights is not a love letter to London. It's a scraggy postcard with a few tired, heartfelt lines scribbled on the back, something like 'why won't you leave me alone, London? Why?'. Funny and recognisable vignettes of city life pepper the pair's collapse into toxic twentysomething twattery: the dodgy clubs, the terrible jobs, the embarrassing sex. And looming constantly over the whole thing, like the yet-to-be-built Shard, is financial failure and doom. We think it's got the influence of the aforementioned Amis's Money running through it like a hangover. In a good way.

Buy on Amazon; buy from the publisher. Review by Rachel Holdsworth. 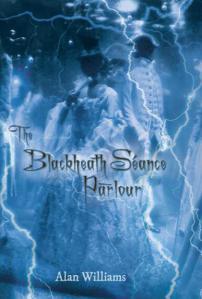 A couple of weeks ago, a cropped photo of what looked like a book cover blurb was doing the rounds on Twitter. "To say that the novel is set in Blackheath is an understatement – The Blackheath Bugle." Aha, we thought. We know what that's about. Set in Blackheath in 1842, the book conjures the very soul of the Victorian village, much as sisters Maggie and Judy Cloak conjure the dead in the seance parlour with which they replace their failing chocolate shop.

It's written in mock-gothic style, parodied to extremes in the vampire/horror novel-within-a-novel sections. Yet while the fictional novel (this could get confusing) and mediumship provide an excuse for scandalous set pieces, their main purpose is to expose the frailties within the sisters' relationship; Alan Williams is more concerned with his characters' inner lives than the ectoplasm they spew forth. It's also lighter than you might expect, and impossible not to laugh at the pomposity of Judy's terrible novel. One to read over a gin in the Hare and Billet.

Buy on Amazon; buy from the publisher. Review by Rachel Holdsworth. 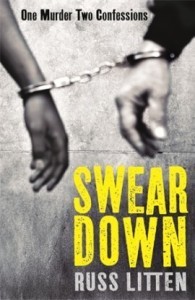 Swear Down by Russ Litten

This one's been out since spring, but we only just got round to reading it, and are very glad we did. Swear Down is set on a troubled east London estate and the wider Hackney area. A young gang member has been stabbed to death. Two people are in custody. Carlton McKenzie, another youth from the estate, is the obvious culprit: he has ample motive and, besides, he's confessed to everything. But a 70-year-old wheezing sailor from Hull, unlikely though it seems, also pleads guilty. Newly promoted Detective Sergeant Peter Ndekwe is assigned to the case, battling against the clock and a crass, unsupportive boss to unpick the mess. Should he pin the charge on either, neither or both suspects?

With crime already committed and probable perpetrator(s) apprehended, much of the book is written in the form of suspect statements. We get to know the two suspects intimately through their own words, rather than by third-person descriptions. The hybrid outcome, somehow, is both a tight story-driven thriller, yet also a believable, emotional, character-focussed piece.

Litten, the publisher tells us, works as a writer in prisons. His close contact with young offenders really shows through in this masterful tangle of conflicting emotions and motivations. A spellbinding who-hasn't-dunnit.

Buy on Amazon; buy from the publisher. Review by M@.

Yes, yes, you can buy these books from Amazon and Waterstones, but you can also support your local bookshop.