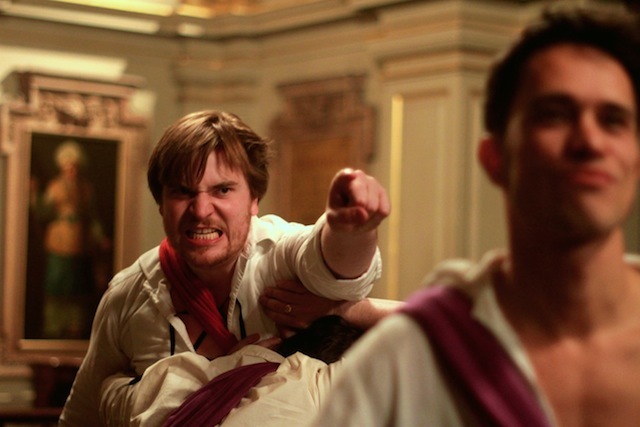 “This is experimental theatre. It may not work.”

Whether such flagrant expectation-lowering as the top line of the programme lends a frisson of excitement or the downright jeebies might depend on your attitude to theatre companies who begin and end their season on the thirteenth of the month. But it’s precisely this endearing combination of British self-effacement and chevalier-style bombast that means The Cannibal Valour of Bussy D’Amboiss, on the whole, work.

Owle Schreame Theatre Company’s Brice Stratford is a brave man, not least because he’s created a show in which swords whistle mere inches from audience members’ heads and six people 'die' in the first ten minutes, some of them audience members. Actually, everybody dies. But then that’s normal for Jacobean tragedy.

From the moment Bussy D’Ambois (Stratford himself) swaggers onstage, a cocky combination of d'Artagnan, Porthos and Charlie Sheen, kissing the girls and tossing a gauntlet before the rest of the court, it’s clear the large cast is gleefully aware they’re — sometimes literally — dancing on the graves of the poets they’re presenting in repertory this season. Never heard of George Chapman, Thomas Nabbes and James Shirley? Well, that’s sort of the point.

Jacobean tragedy of the ‘blood-and-guts, conjure-up-the devil, everybody-dies’ variety is generally relegated these days into a few big-hitters for the GCSE market. Lesser-known playwrights languish within the dusty tomes of academia. Two of the three plays Stratford’s blown the dust from have never been performed at all, which makes Bussy D’Ambois’s one production in living memory a veritable blockbuster.

Of course, there’s often a reason why some plays never see daylight but arts funding just now means experimentation with new or rare work is often shunned in favour of bums on seats. Owles Schreame, in dumping those financial constraints by openly accepting they won’t make money this season, have been able to take liberties with everything else. The language, the venue, the rehearsal style (the first performance was also the first time the entire cast was in a room together); none of these decisions takes the easy route.

Is it a lost masterpiece? Probably not. By modern standards the plot’s messy – ‘major’ characters are introduced only to disappear without trace, themes are inconsistent and conclusions hard to decipher. But the language is sharp. The staging is quirky. The action is visceral. The acting is honest. The devil is scary. The torture is nasty. Oh, and everybody dies.

The Cannibal Valour of Bussy D’Ambois runs in rep with The Unfortunate Mother and Honoria and Mammon at the Poets Church, St Giles in the Fields, on selected dates at 7.30pm to Friday 13 December 2013. Tickets are £5.

Londonist saw this show on a complimentary review ticket.