Book Review: Georgian London, Into The Streets By Lucy Inglis 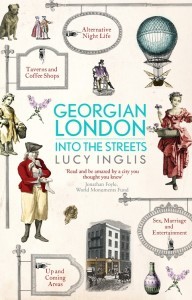 Among the stars of London's diverse blogosphere (if we may still use that term in 2013), Lucy Inglis's Georgian London always stood out. The winning combo of primary research, unexpected tales and a stalwart sense of humour make it a must-read for anyone interested in the city's past. Lucy now joins the ranks of writers who've seen their blogs blossoming into book deals with the publication of Georgian London: Into The Streets.

The book, no prizes for guessing, looks at the capital during the 18th and early 19th century. This is well-trodden ground, covered most recently by Dan Cruickshank (2009) and Jerry White (2012), and the book takes a similar 'everyday life' purview to the social histories of Liza Picard and Maureen Waller from a little further back. The theme and approach, then, aren't particularly novel. Yet Lucy's style and pace give her book an edge over the weightier precursors. She never lingers too long on a topic, and bounces through the streets with a kind of learned verve.

Rather than divide the book into themed chapters, it is instead sliced by geographic area. This means that the same topics (public health, say, or entertainment) are revisited a number of times at different locations and thus levels of society. It works well, even if it means a few London-wide phenomena fall through the cracks. The illustrations are a mix of the now-familiar (the Rhinebeck Panorama and a mandatory Hogarth image) and the less well known, such as an early balloon flight by Vincenzo Lunardi.

Fans of the blog will recognise many of the incidents, but much of the book comprises fresh material. The real sparkle lies in its relentless cavalcade of insightful anecdotes: 200,000 people a year bathed in the Serpentine; UCL is built on the site of an old dairy farm owned by a pair of aged maiden sisters who enjoyed playing spiteful pranks on trespassers; Horace Walpole anticipated Heathrow Airport by predicting Hounslow Heath would become 'the harbour of the skies' (he'd just seen a balloon flight). And so on. There's much to treasure here.

In summary: without developing a reliance on cheap gin and contracting smallpox, you probably won't get closer to Georgian London than this pacy but superbly researched book. Others have gone into more depth, or focussed on one social stratum, but Inglis truly mingles.

Georgian London: Into The Streets by Lucy Inglis is out 5 September 2013 from Viking.