Celebrate The 400th Anniversary Of The New River 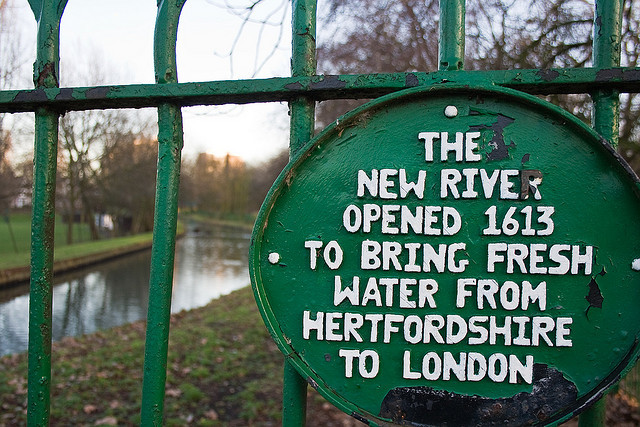 It's not new and it's not a river, but the New River is cause for celebrations across four London boroughs this month as the 400th anniversary of its opening is marked.

Never heard of it? Many haven't. Yet it still supplies drinking water to London and it's possible to walk nearly its entire length, thanks to Thames Water opening the New River Path to the public.

Delve into its history even a little and it becomes clear that making the New River happen was a huge and imaginative feat of engineering. The aqueduct was hand dug through what was then open farmland from its source near Ware in Hertfordshire, through Broxbourne into Enfield, Haringey, Hackney and Islington, terminating at the New River Head, just outside the city. As London developed and water systems changed, much of the New River was obscured behind residential developments, gated off or put in pipes and forgotten, but there's huge local enthusiasm for it in the neighbourhoods it runs through, as the following list of anniversary events, many of them community-led, proves. Events are listed as the New River flows.

Sir Hugh Myddelton (or Myddleton*) was the the driving force behind the construction of the New River and along its course there are loads of places that bear his name, including this Georgian house whose garden was once bisected by the New River. In honour of the anniversary, special box-edged beds have been planted to remember where it used to run, through what is still known as New River lawn. On Sunday 29 September, a special water feature will be unveiled in the gardens. Myddelton House Gardens is a very beautiful place to visit and admission is free.

A free exhibition is now on at the Enfield Museum at the Dugdale Centre, near Enfield Town station telling the story of the New River. On Saturday 28 September it seems there will be a free celebration event in the shape of a day of walks, talks and performances but as yet the only evidence for this is a listing in the Enfield Society's diary and a mention in Council meeting minutes.

Another namesake, Myddleton Road puts on its second ever street market at the point where the New River meets the road and goes underground, to emerge at the other end of a newly restored Victorian tunnel at Alexandra Palace. The market will have a festival atmosphere, with children's activities in the Community Garden and a great view of the New River on Sunday 29 September between 11am-4pm. The local photography club is putting on an exhibition of New River Photography at The Step, 101 Myddleton Road. If the trains are running, use Bowes Park station, or get the Piccadilly line to Bounds Green and it's a 5 minute walk.

Communities in Harringay, Finsbury Park and Manor House have collaborated to produce the Hidden River Festival. The New River is visible in Finsbury Park (see photo) but it snakes between the backs of houses and disappears underground for a time at other points in this area. The Hidden River Festival will show a heap of local love to the New River with events at three locations on Sunday 22 September.

The north-east bit of Finsbury Park will have music, food, stalls, community groups and local historians on hand while other events take place at the Catwalk Collective in the jolly creative Manor House Warehouse District and the Castle Climbing Centre, which is an amazing, gothic, former pumping station. The New River Cantata — specially commissioned for the festival — will gets its premiere and, if you want a more peaceful celebration, London Wildlife Trust will host a picnic on the banks of the New River at Stoke Newington East Reservoir Community Garden. Keep an eye on the festival Facebook page for updates.

South of Manor House the New River surfaces again in Clissold Park and on Sunday 29 September Clissold Park User Group is putting on a bit of a do on the old bowling green with traditional crafts and games, a chance to find out about the New River's wildlife and the opportunity to contribute to the making of a commemorative mosaic and take part in a silent disco. At 3pm the opening of the New River will be relived! Free, from 12-4pm.

South of Clissold Park the New River goes underground again but its route has been preserved as a mini park the width of the New River, running the length of Petherton Road, which ends near Canonbury Station. Local residents are having an informal picnic celebration on this lovely piece of reclaimed land on Sunday 29 September between 12-4.30pm. Look out for the fishes in the trees!

The former route of the New River from Douglas Road to Essex Road has been preserved as a beautiful linear public park maintained by Islington Council. Junior Explorers and their adults are invited to find out about the New River on Saturday 28 September between 11am and 1pm. On Sunday 29 September, there's a free community fun day on the Walk with characters in period costume, Punch & Judy, storytelling, bouncy castle, a fire breather and an exhibition by Islington Museum between 11am-4pm.

You can enjoy the delightful New River Walk yourself, taking in the information boards along the way, anytime and for free.

A rather special event, funded by Thames Water and organised by CASS architecture students, takes place at New River Head on Sunday 29 September between 1.30-4.30pm.  There will be a re-enactment of the opening of the New River on the very site it happened 400 years ago plus live music, food and fireworks. The event is invitation-only as it takes place in a private garden but you can email the organisers and ask for one.

Or perhaps you fancy tackling the entire New River Path? At the time of writing there are three places left on the New River Anniversary Walk,  a hike/guided tour/mission which takes place on Saturday 28 and Sunday 29 September with an overnight stay at a hotel. Distance is around 30 miles all in. Price and booking info here.

Islington Council is offering free walks from Canonbury to New River Head in the week running up to the anniversary. These are fully booked but you can join a waiting list.

If you want to explore any section of the New River yourself this pdf document is one of the simplest and clearest guides around.

*Sir Hugh's surname is spelt inconsistently in different sources. Myddelton is the more archaic, Myddleton is also used. They're all talking about the same bloke.

Photo of sign in Finsbury Park by Andrew Hughey via Londonist Flickrpool.