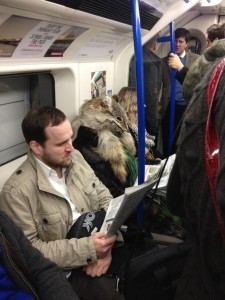 Yesterday, moved by mildly worrying reports of smoke billowing out of trains, we used the @Londonist Twitter feed to ask our readers what the weirdest and most unnerving things they’d ever spotted on London transport were.

Perhaps our favourite of the responses was that from @ChloeHamilton, who'd seen a man dressed as some sort of rodent on the Piccadilly Line, and had the photographs to provide it. (Look. At that. Seriously. What is going on there?) But during the course of an hour we also uncovered tales of bad behaviour, from passengers...

A few stories were frightening:

...but rather more were embarrassing.

A lot of them, you'll be surprised to learn, involved booze.

Some of them involved food.

Then, inevitably, there were those that were just really, really weird.

But let's end on a happy note. Here are some of the more heart-warming tales we were told.

Oh, London, we love you.