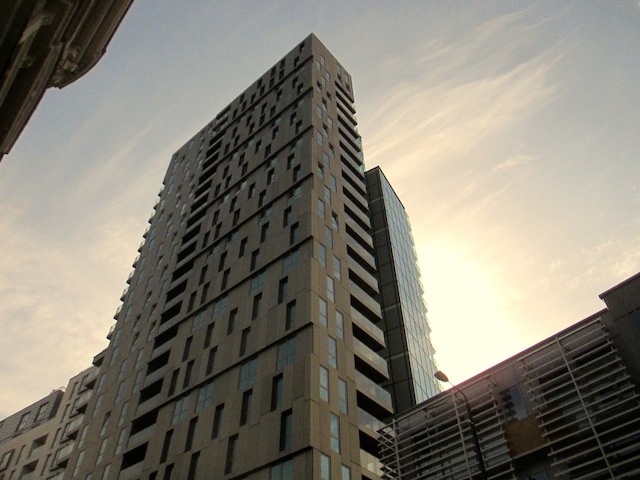 Buildings in Lambeth, Shoreditch and Cally Road have been shortlisted for a little-sought-after architectural award.

Each year, Building Design Magazine (BDM) announces the ugliest UK building completed in the past 12 months, as nominated by its readers. London always figures prominently in the so-called Carbuncle Cup. Last year's winner, beating the Orbit Tower, was the restored Cutty Sark clipper at Greenwich, with its controversial glass canopy — ugly to some, but beautiful to others. The 2010 winner was Elephant's Strata Tower, shaped like an electric razor.

This year, three new buildings are up for the prize. Most prominent of the trio is the Avant Garde residential tower on Bethnal Green Road, pictured above. BDM opine that "this grossly over-scaled development in East London was bad enough before they gave it such an inappropriate name". Alas, it might not be over-scaled for long, with several similar schemes planned for the area. Our dislike of the building, designed by Stock Woolstencroft, is less about the height and more to do with the sewerage-brown cladding on the north face. Yuck.

Also up for the award is 465 Caledonian Road, a block of student accommodation by Stephen George & Partners, masked by a disembodied Victorian facade (pictured here). The final London building in the list is a new Premier Inn in Lambeth (picture), described by BDM as "a travesty in more ways than one — we shudder at its lumpen form and mourn the building demolished to make way for it". That one's designed by Hamiltons.

The three are up against Castle Mill housing development in Oxford (which received more nominations than anything in the competition's history), Redcar Beacon (a kind stunted, squashed version of London's Orbit Tower), and Porth Eirias Watersports Centre in Colwyn Bay (known to locals as 'the dumpster').

The winner, chosen by an architectural jury, will be announced on 30 August.