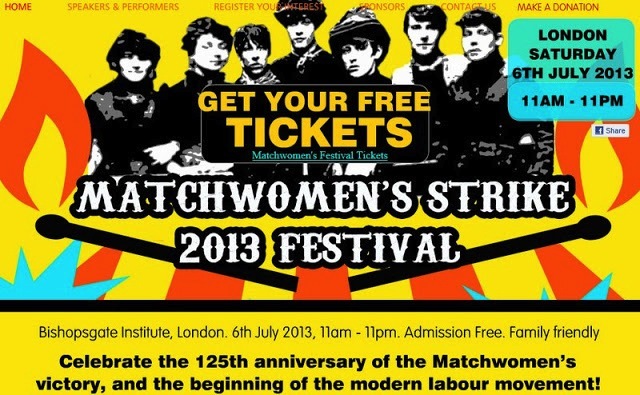 Match workers strike! It sounds like the basis of a bad joke, but the brave industrial action of the East End match women 125 years ago this month, was anything but. A one-day festival at Bishopsgate Institute this weekend delves into the history and influence of the matchwomen's strike, with top political speakers and a bit of a knees-up.

Working in a 19th century match factory was about as nasty as it got. The workers had to contend with 14 hour days, trivial wages, harsh fines for minor misdemeanours, and the health risks of working with white phosphorous (do an image search for Phossy Jaw for a startling insight into that one). In the days before unions and the welfare state, where unemployment could mean starvation, the women had few options but to toil in these grim conditions.

In 1888, activist Annie Besant wrote a damning exposé of the situation at the Bryant and May factory in Bow. The management were furious and bullied their staff into signing a refutation; many refused. On 2 July 1888 (150 years ago on the day of writing), Bryant and May sacked one of their nobly recalcitrant workers, sparking a mass walk-out of staff. Around 1,400 women and girls refused to work, demanding better working conditions. After battling the establishment and lobbying parliament, the strikers were victorious. Their triumph encouraged other down-trodden workers to fight for better work conditions, and the modern labour movement was born.

On 6 July, 12-hour celebration of the matchwomen's achievements runs at the Bishopsgate Institute. Speakers include TUC leader Frances O'Grady, Tony Benn, Owen Jones and Kate Hardie. Bill Oddie talks about his matchworker ancestry, and Terry McCarthy looks at the dock strikes of 1889.

As well as the heavy stuff, the day will also feature plenty of laughs, stalls, food, and an East End knees-up. Milliner Zena Sullivan will show you how to make a matchwomen’s hat – just bring some fabric, and perhaps some feathers. Leeson O’Keeffe (formerly of Shane McGowan’s Popes) provides traditional and contemporary Irish music, plus poetry from Michael Rosen, Hollie McNish and John Hegley.

The Matchwoman's Festival 2013 runs 6 July from 11am to 11pm at Bishopsgate Institute, and is entirely free. Pre-book a ticket here.