How The London Boroughs Got Their Names 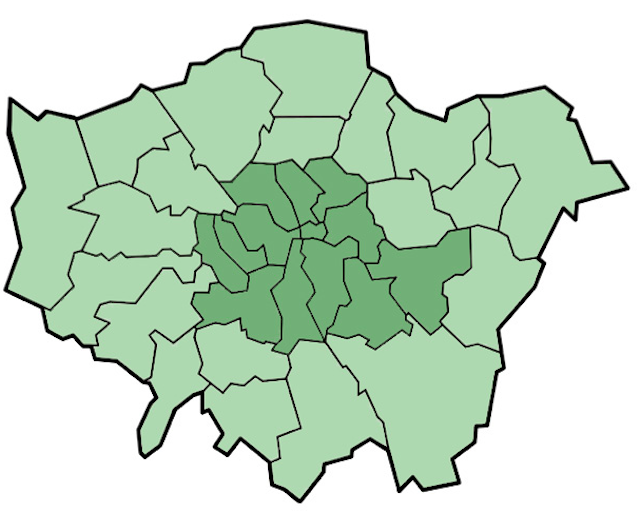 More than fifty years ago, the London Government Act 1963 received Royal Assent. It paved the way, two years later, for radical changes in London's political boundaries. The 32 boroughs that we still know, love and pay our council tax to, were created. (The tiny City of London — also known as the Square Mile — holds different political status to the 32 boroughs, and carried on as normal after the Act.)

Many former boroughs (Finsbury and St Pancras, for example) disappeared overnight, though you can still see their names on old street signs around town. The new, bigger, amalgamated boroughs needed new names. In most cases, ancient appellations were chosen. So here's our guide to the etymology of London's boroughs. Find out which areas are named after sheep, chalk, crocuses...and a hill in Yorkshire.

Barking is an ancient, Anglo-Saxon phrase, first recorded as Berecingas. The name either derives from a local chieftan called Bereca or means "the settlement by the birch trees". Dagenham is also ancient, first recorded as Dæccanhaam in 666 AD. 'Haam' means 'home' or 'homestead' and Dæcca was presumably a local land-owner or leader.

The borough of Barnet contains plenty of Barnets — High Barnet, Chipping Barnet, Friern Barnet, New Barnet... All derive their names from the Anglo-Saxon word 'bærnet', which suggests the clearing of woodland by burning. It was first recorded as Barneto in 1070.

Recorded in Domesday Book as Bix, and later as Bixle (a good name for a breakfast cereal, wethinks), 'Bexley' translates as pasture by the stream — presumably the River Cray, which still flows through the area.

The most ancient borough name of all. Brent predates the Anglo-Saxons and even the Romans, and comes from a Celtic word meaning 'holy one' or 'high place'. A river of the same name still flows through the borough. It is one of only a handful of pre-Roman names still in use in the London area, along with Penge, Thames and London itself.

Yet another Anglo-Saxon derivation. Bromley was first recorded in 862 AD as Bromleag, which means 'a woodland clearing where broom grows'. Interestingly, the other Bromley (Bromley-by-Bow) is of different derivation, coming from a word meaning bramble field.

Both the borough and Camden Town are named after Charles Pratt, 1st Earl of Camden, who owned land here in the late 18th century. Camden Place was his seat in Kent, itself named after William Camden who lived in the property from 1609.

The borough and its largest conurbation take their name from the Anglo-Saxon phrase croeas deanas, and later crogdene, which, contrary to Croydon's current appearance, meant 'valley of the crocuses'. The valley was no doubt a centre of crocus cultivation, yielding saffron.

Ealing was first recorded as Gillingas around 700 AD. Gillas was another of these local chieftans, and the 'ingas' part denotes 'the followers of'. The spelling has since flitted among Illing, Gilling and Ylling, before finally settling on Ealing.

Two possibilities here. It could derive from the fields belonging to a chieftan called Ēana, or it could be named after the Anglo-Saxon for lamb, which was ēan. Either way, Enfield was first recorded in Domesday Book as a small settlement called Enefelde.

The Royal Borough of Greenwich

London's newest Royal Borough also has Anglo Saxon origins, stemming from Grenewic, the green place on the bay (which it still is).

The name is not recorded until the 12th century, but Hackney was undoubtedly settled much earlier, as evinced from the 'tun' of Dalston and Clapton and the 'wic' of Hackney Wick. A leading theory suggests origins with Haca's ey, an 'ey' being an area of raised ground in marshland.

Hammersmith has disputed origins as a place name. Some sources suggest it derives from Hammoder's Hythe (a safe haven belonging to Hammoder), others, perhaps more satisfyingly, suggest it's simply a concatenation of 'hammer' and 'smithy', denoting an area important for metal working. Fulham is an area belonging to an Anglo-Saxon called Fulla, but rather than the usual 'ham' meaning homestead, this one was originally 'hamm', signifying a bend in the river.

The borough name, as well as its conurbations of Harringay and Hornsey, derive from Haeringes-hege, the enclosure belonging to Saxon chief Haering.

It's thought that this name denotes a heathen shrine (hearg), built on Harrow Hill. Caroline Taggert (see sources) notes that its earliest recording is Gumeningae Hergae, a heathen shrine of the Gumeningas tribe.

Havering might now seem like a relative backwater borough to most Londoners, but it was once home to an important palace of Edward the Confessor. Its name is recorded in Domesday Book as Haueringas, for the followers of a man called something like Haefer.

A 'don' usually denotes a hill in Anglo-Saxon place names, and Hillingdon is no different. It's in Domesday Book as Hillendone, suggesting a hill belonging to a man called Hille, Hilla or Hilda — probably where Hillingdon Hill rises near Uxbridge.

This one's not certain. It might derive from Honeslaw, meaning an area of land suitable for hunting, or it may indicate a hill claimed by a man called Hund or a tribe called Hundi.

More properly, it should be Islingdon, as (like Hillingdon and Wimbledon) the name denotes a hill (don), here formerly governed by a Mr Gisla. Old records call the place Giseldone (1005) and Gislandune (1062). The area was known as Isledon well into the 17th Century.

Royal Borough of Kensington and Chelsea

Kensington's yet another place named after an otherwise forgotten Saxon chappie. This time, Mr Cynesige or Kenesigne. Chelsea's a bit more interesting, with various ancient spellings along the lines of Chelchith, meaning the landing place or wharf for chalk. Chalk would have been used in fertiliser.

Royal Borough of Kingston Upon Thames

Kingston was an ancient seat of kings. Recorded as Cyninges tun in 838, the name means King's manor or estate. Several 10th century kings were crowned here, as still remembered in the area's Coronation Stone, near the Kingston Guildhall.

Rather satisfyingly, the name means 'landing place for lambs', and it's a shortened version of the earlier Lambehitha (hitha being a common ending for riverside landing places like Rotherhithe).

Leofshema is thought to be derived from the Jute name Leof or Leofsa, with the hema bit being a variant on 'ham' or dwelling.

The name is again Saxon and means either farm by the pool or Maera's homestead. The former is perhaps most likely, as Merton stands on the banks of the Wandle and its associated flood plains.

One of the few borough names not to derive directly from ancient roots. Newham was formed in 1965 from East Ham and West Ham, the 'new' bit conjured up to declare that, yes, this political entity is new. The 'ham' part of the name indicates, in this case, low-laying land surrounded by marsh.

Quite simply, named for a red bridge which bestrode the River Roding from the 17th century, until it was knocked down for road improvement in 1922. Here's the modern replacement.

Another relatively recent coinage (well, around 1500), Richmond took its name from the now-vanished Richmond Palace, built on the river by Henry VII. His former title was Earl of Richmond, relating to the town in Yorkshire. That place's name comes from Old French for 'strong hill'.

This ancient part of London was settled by the Romans. Early records call it Suthriganaweorc or Suthringa geweorche, meaning 'the defensive works of the men of the south' (i.e. Surrey).

Recorded as Sudtone in Domesday Book, the name translates roughly as 'south farm'.

Predictably, the name refers to the hamlets and villages closest to the Tower of London. Despite having the whiff of a modern coinage, the name has been used for centuries.

Wandsworth takes its name from the River Wandle, which remains one of the delights of the borough. The Wandle got its name from an Anglo Saxon called Waendel, who owned land round here.

The name relates to the famous Abbey — 'mynster' being Old English for a church. The 'West' part simply denotes it as west of the ancient City, and its great church of St Paul. In Anglo Saxon and early Norman times, the area was known as Torneia or Thorney Island, for an islet of that character, upon which the abbey and Palace of Westminster are built.

See also: Our own attempt at redrawing the boroughs.