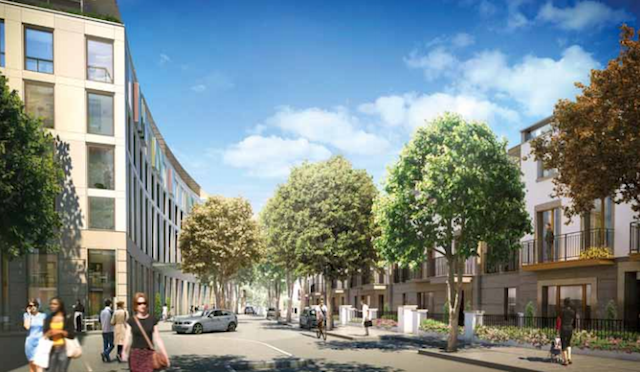 Earls Court exhibition centre and hundreds of surrounding homes will be demolished as part of a 77-acre, £8 billion redevelopment. Mayor Boris Johnson yesterday gave the go-ahead for the project, which straddles the boroughs of Hammersmith and Fulham, and Kensington and Chelsea.

The plans call for the complete demolition of the famous exhibition centre, as well the West Kensington and Gibbs Green housing estates and an adjacent rail depot. In their place, developers will create around 7,000 new homes, 37 acres of open space, a new high street and plenty of commercial property, in a masterplan by Sir Terry Farrell. You can find more details on the My Earls Court website.

A project on this scale, which requires the rehousing of hundreds of people, was always going to be controversial. Anti-demolition group The People's Estates (@PeoplesEstates) has lobbied hard against the planning application, arguing instead for a community-led housing association to oversee any development.

Questions have also been raised over how Hammersmith and Fulham Council is managing the rehousing of residents. Earlier this year, former council leader Stephen Greenhalgh was accused of improprieties, a charge that was later dismissed. Guardian journalist Dave Hill has kept a tenacious eye on developments, and believes that answers are still needed over the wider council's activities.

Yesterday's decision all but seals the fate of the exhibition centre and surrounding area. Boris Johnson, while "acutely aware of the concerns" points to the creation of thousands of jobs and a boost to the local economy. "Having weighed up all of the considerations I’m of the firm view that this is a project that will deliver huge benefits to the area and beyond for years to come,” he concluded.

Assembly Member Darren Johnson was less ebullient: “By backing this proposal, Boris Johnson is condemning this part of London into a playground for the super rich with mostly extortionately priced homes that will not help the vast majority of ordinary people.”

Nicky Gavron AM, meanwhile, highlights a potential conflict of interest in the decision by Boris Johnson. The Mayor is also Chair of Transport for London, which stands to gain financially from the sale of the rail depot. "Boris has agreed to the knocking down of Earls Court for short-term gains for TfL. This shows a complete disregard for local people and the local economy," she said.

Now that the Mayor has approved the project, Secretary of State for Communities and Local Government Eric Pickles has three weeks to decide whether to let the decision stand or to launch an enquiry. If the scheme goes ahead, it will take around 20 years to fully develop.