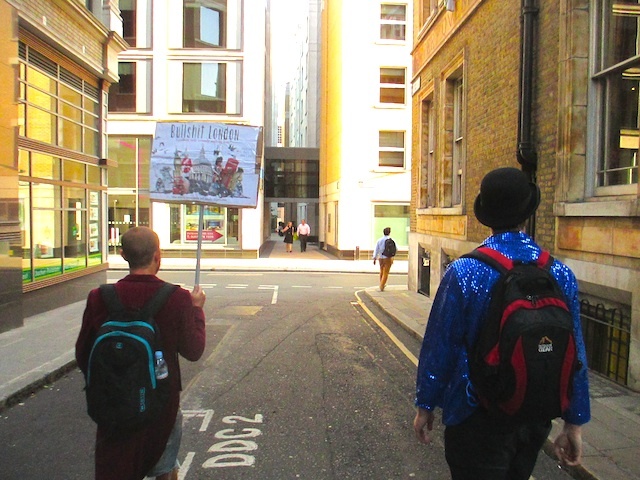 Did you know that the London Eye is powered by animals, or that the Houses of Parliament were hewn from a giant pyramid, shipped over from Giza in Victorian times and chiselled down to size? Bullshit London has been offering 'factually inaccurate walking tours since 2013'. The message is simple: "London is an incredible city, so why should its tours be credible?". We recently joined them for a couple of hours of fabrication and embellishment par excellence.

We arrived at St Paul's under some trepidation. Would our guides actually be there, or was the whole thing bullshit? But Rob and Reuben (if those are their real names) were easy to spot, on account of their outrageous costumes and large 'Bullshit London' placard.

Their tour is geared up for Londoners, but focusses on the more touristy parts of town such as the South Bank and Whitehall. Struggling through the crowds at first seemed a little irksome, but it soon became apparent that there was a good reason. The constant barrage of nonsense and lies is certainly entertaining in its own right, but watching the reactions of passers-by is even more so. Some were confused, others duped, and one or two delicate souls seemed to find the word 'bullshit' offensive. Cheers all round for the particularly bold Polish tourist who joined in without prompting, as Rob and Reuben delivered another falsehood through the medium of beat-boxing.

It's not a tour for shrinking violets. You might be asked to hold hands with strangers, or join an impromptu pseudo-religious bullshit ceremony outside a certain organisation's Blackfriars HQ. Those who love this kind of participative entertainment will find much to cherish. Not every gag works, but the pace is frenetic, and the canards fly faster than French ducks.

Towards the end, we passed a group of boisterous lads who — mistaking us for naive tourists — indulged the age-old tourguide wind-up of shouting "It's all lies! He's making it up!". If only they knew.

Bullshit London puts the 'city' back into 'mendacity' and is the perfect way to learn less about the capital.

Tours leave every Thursday from the steps of St Paul's at 7pm and last approximately 2 hours. Prebook your place here.

See other alternative tours of London.