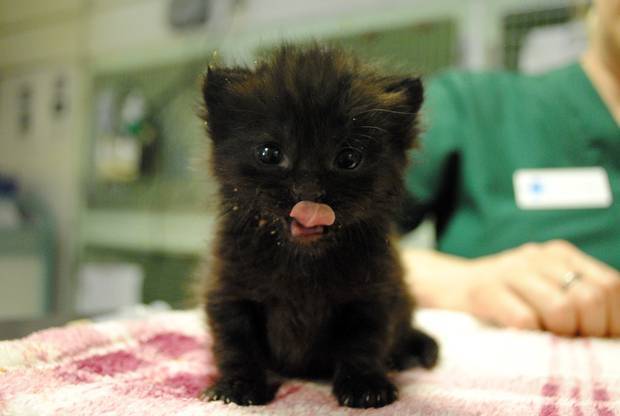 We've all seen pigeons and mice scurrying around on the underground, but this makes for a far cuter Tube passenger.

The kitten, thought to be about four weeks old, was abandoned on a District line train at Victoria. The tiny ball of fluff was found on Monday night, cowering in a box, and covered in an unidentified sticky substance. After being handed to TfL staff, she was soon cleaned up by veterinary nurses at the animal charity Blue Cross, which has an animal hospital nearby.

In keeping with what seems to be the unwritten rules in such cases, the kitten has been named Victoria after the station that was briefly her home.

As Victoria is so young, she needs round-the-clock care. She should still be feeding from her mother, so nurses have been hand-feeding her. The charity says the lucky young cat is doing well, and will be transferred to the charity's rehoming centre in Oxfordshire on Monday. What Victoria plans to do with her remaining eight lives has not yet been disclosed.