In recent years pulled pork has gone from being the lame punchline to a schoolboy joke to the signature dish for London's many meat-heavy restaurants and pop-ups. The lunch chain Eat even has their own version. Joining the swelling ranks is Lazy Bones in Farringdon.

We showed up on a Friday afternoon, where the place was buzzy not too busy, and ordered the pulled pork bun and a side of wings. Rookie error. The wings were huge, ridiculously large, and a meal unto themselves. Which was a shame as they were poor. The meat had been liberally doused in a tepid 'hot' sauce and arranged messily in an overflowing basket. Even the accompanying blue cheese dip was bad, a glutinous mess that cleaved to the small container every time we tried to dunk a piece of meat. 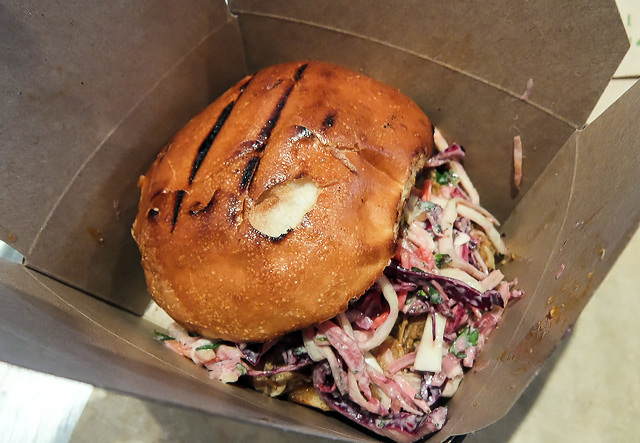 The pulled pork bun was better, if only because it masked the taste of the wings. Yet pulled pork is all about the flavour, and here it pales when compared to meat masters like Pitt Cue. And you want your brioche bun to hold firm and soak up the juices as you bite; by the time we were halfway through the bread had succumbed and adhered mostly to our fingers.

Food aside, Lazy Bones is good. The staff were pleasant, service prompt and the musical choices were great ; we later discovered the place has a system whereby you can program the jukebox with your smartphone. The decor is also fun, and a separate evening trip revealed a world of excellent imported North American beers (try the Moosehead) and well-made cocktails. Stick to the drinks and you'll be okay, but we can't recommend the food right now.

Lunch for one, with tap water only, cost £13, including tip.