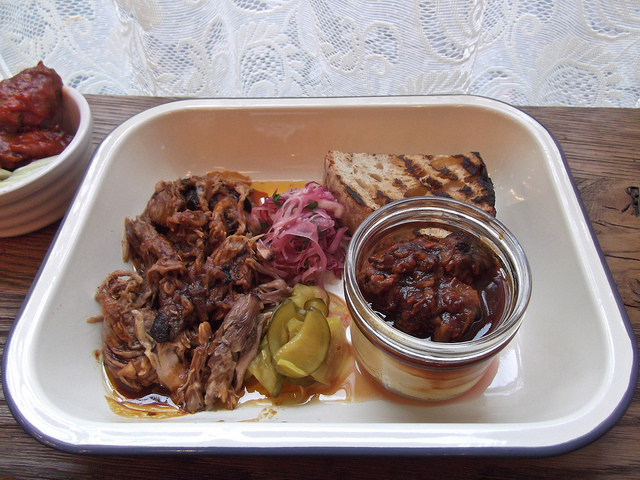 The sauce stains on the curtains suggest you might wanna roll up your sleeves if you're planning to chow down at Pitt Cue Co as a saucy lunch here might not only get a bit messy, it could prove epic as well.

Another recent street vendor to brick and mortar transformation and a step up and in the right direction from Bodean's and other Americana meat peddlers, Pitt Cue Co brings its heap of “BBQ, bourbon and beer” to the Soho masses, or at least to those carnivorous passers-by who can afford to spend around a tenner or more for lunch. If that includes you every once in awhile, Pitt Cue is worth the quids.

Pulled pork (with house pickles, slaw and a side, £9) is massive and melt-in-your-mouth delectable. Other mains such as beef brisket, ribs, house sausage and occasional specials like ox cheek should satisfy even the most avid of meat eaters. If you're having trouble deciding which side to choose, you'll inevitable be steered toward the burnt end mash. More novelty than must-have nosh, other sides such as baked beans, braised sprout tops or hock, beet and pickle salad might prove better accompaniments. Still have room? Smoked hot wings with pickled celery (£4) are a rocking extra.

As for the beer and booze, it's a tip of the hat to the other side of the Pond. Pitt Cue Co is perhaps the only establishment in London where you can slurp a PBR and should be top of the list for anyone keen to sip through an impressive list of bourbons. They're big on the pickle back shots here too. Yeah, “pickle” features quite prominently on both the “Meat” and the “Drinks” sides of the menu.

Filling a void left way back in '08 when Bubba's Arkansas Cafe closed its famed Spitalfields Market BBQ joint, Pitt Cue Co is a welcome addition to the London dining scene. Unlike the ramshackle wonder that was Bubba's Pitt Cue's is , as described in the Guardian's review, an “urban British hipster's take” on American comfort cravings. Londonist might add there's a strong element of Williamsburg in there as well. A little like MEATliqour with better lighting, less pretense and somewhat better service, the food is down home, deep south USA but the vibe suggests they're shipping in the wait staff from Shoreditch and Dalston (do skinny jeans and BBQ clash?).