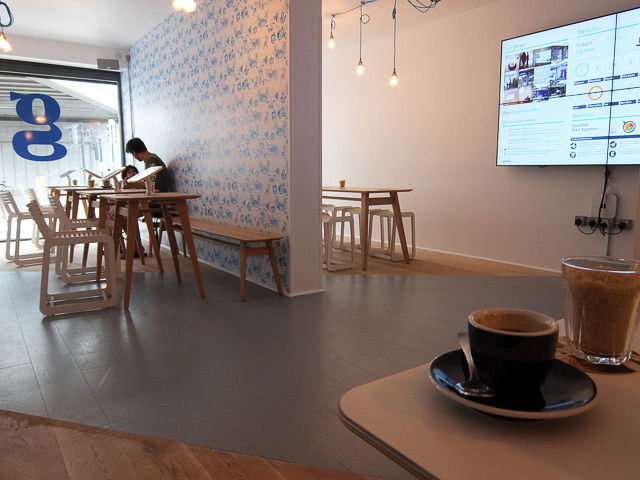 Sorely testing the principle that there's no such thing as bad publicity, the opening of a coffee shop operated by The Guardian named #guardiancoffee inspired hoots of derision across Twitter last week. Some came up with cruel but witty suggestions about what might be on the menu; others speculated about the economics of such a fickle business; and almost everybody thought it a risible idea.

In truth, it's not an original one. The London Review of Books has a cafe, as does Monocle magazine, while Vice has owned a Shoreditch pub for a decade. And it might not be such a bad idea. The Guardian should at least be credited with trying out something new in what is a challenging marketplace for newspapers.

So, is it any good? They've got the important bit right: the coffee is from Nude Espresso, who know their beans. But this place is likely to sink or swim by its ambience. And this is where the problem lies. It's a self consciously high-tech operation, with a large screen on one wall displaying sales data and selected tweets with the #guardiancoffee hashtag, an infographic behind the counter showing the makeup of the coffee blend and, most notably, an iPad affixed to every table. Each device is on a stalk that can be rotated but not removed, and is locked to the Guardian's iPad edition. Unfortunately, the tables are small and dominated by the tablet, meaning they're not much use for anything else, such as folding out a newspaper to read (the contrary luddite in us had brought along the FT).

The abundance of screens and pared-down furniture, combined with the insipid high-BPM tunes seeping from the speakers, combine to make #guardiancoffee an unwelcoming place, a bit like an unimaginative science fiction novelist's view of sterile socialising in the 21st century. Perhaps that's the point: the Guardian is claiming this is a place for journos and tech folk to meet and work (Jemima Kiss has already hosted a video interview), although such lofty aims are undercut by the lack of open wifi. Perhaps the plan is to save money by vacating their King's Cross HQ and having staff work remotely in these hubs?

#guardiancoffee is at Boxpark, Shoreditch.