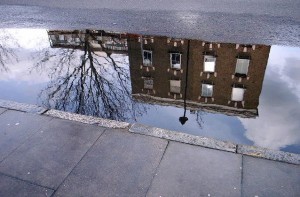 For the first time in the housing benefit system's history, claimants in the inner London private rented sector have fallen – not, we suspect, because poorer Londoners are suddenly more able to handle high rents, but because they're moving. Who saw that coming? What? Oh, that's right, loads of people, including London Councils who published a new report yesterday.

Between January 2011 and January 2013, an extra 58,000 London households started claiming housing benefit, two thirds of whom are in the private rented sector. Most claimants for Local Housing Allowance (LHA, the benefit for people in private rented accommodation) would have been hit by the changes (mainly caps) between January 2012 and January 2013; during that time inner London experienced a fall in LHA claimants for the first time in the system's history (2%) while outer London claimants grew by 9% (90% of whom, by the way, are in work). It's not possible to say the growth in outer London is caused entirely by people migrating outwards, but it's also unlikely that households in outer London are suddenly less able to handle local rent rises than those in inner London.

Boroughs with the biggest drops in LHA claimants are Westminster (26%) and Kensington and Chelsea (20%), while Barnet picked up an extra 1,316 LHA claiming households (12%), Enfield an extra 1,225 (8%), Croydon 1,032 (8%) and Brent 1,065 (8%). We took a look at the effects of just such an outward movement a couple of weeks ago – as well as increased pressure on local services, we mentioned that more demand for cheap housing might well increase prices. And, lo and behold, London Councils is tentatively linking increases in prices of the cheapest properties in Barnet and Brent by 11% and 15% respectively. This affects everyone renting in the area, not just people on housing benefit.

Here are some figures for increases in lower quartile – i.e., cheapest – monthly rents for a few boroughs between January 2012 and January 2013, mainly because this is always good for making everyone weep gently:

London Councils has three suggestions for starting to sort out this mess. First, a welfare system that takes into account London's higher cost of living. Second, exempting London from the future below-inflation increases to Local Housing Allowance. Third, a proper look at the additional financial burdens on boroughs because of the effects of welfare reform.

Photo by jennifer brown from the Londonist Flickr pool