From The Bizarre To The Merely Macabre: Sculpture Season At The Grant Museum

By Sarah Stewart Last edited 103 months ago
Sarah Stewart From The Bizarre To The Merely Macabre: Sculpture Season At The Grant Museum 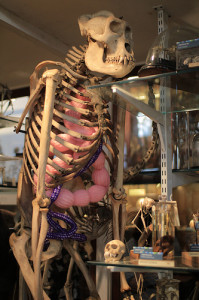 The arrival of Sculpture Season at the Grant Museum sees its zoological collection take an increased turn for the bizarre, the marvellous and the macabre.

Thirteen UCL Slade School of Fine Arts students were invited to re-curate the space produce sculptures and installations in response to and inspired by the museum. Their creations are now on display, mingled amongst the 68,000+ specimens on show.

The works range from the vibrant print and painted work of Joshua Way’s "Buff Boy" - a diorama of muscle-bound hulk demonstrating his physical prowess “gansta-style” before a pair of stag horns, alluding to the sexual competitions among male cervids - to the disturbing and macabre, as demonstrated by "Lumbricus Rubellus Slump" by Jessica Ciantar, a silvery plastic body-bag that appears to slither and writhe out from underneath a display case, surprising visitors as they enter the museum.

Jazlyn Eng knitted internal organs for the skeletons of a rhinoceros and a gorilla. Although they are crude and cartoon-like, one has the feeling that these skeletons will somehow regain their musculature and start to move – zoological zombies reanimated. Equally likely to awaken is the taxidermy kiwi, lovingly tucked in under a duvet, as if it were asleep. This work, "Adorn My Sleep", by Shinobu Soejima, is a darkly humorous response to the collection.

James Trundle’s "Mus maximus – Mus minimus, Albus, Rattus, Pinkass" is unique in featuring no animals, instead using evidence of the burrowing activities of rodents; the casts of their tunnels being the only trace of their existence. Finally, "Viewpoint", by Sarah Cameron a new trompe l’oeil mural in the foyer of the Grant Museum, fools viewers into thinking they can peer into a three-dimensional cabinet, complete with specimens.

The wonder and curiosity apparent in these works draws attention to the scientific study of the specimens themselves, a fantastic synthesis of art and science.

Sculpture Season at the Grant Museum of Zoology runs until 31 August. Open weekdays, 1-5pm. Entrance is free. Be sure to stop off at the newly-opened Micrarium, an amazing, back-lit library of microscope slides, while you're there.