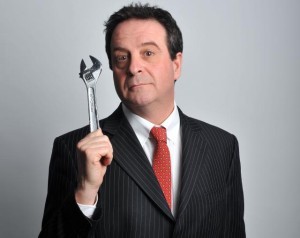 There's a week-and-a-bit of comedy kicking off at The Bedford in Balham on 5 July. Some of the bigger names are already sold out online, but there's still a good mix of previews and finished, polished shows from excellent comedians for you to pick from.

More used to playing proper big theatres, Stephen K Amos is on Saturday 6 July, and the weekend surely can't be finished in better style than with John Hegley and Mark Thomas (pictured). Jeremy Hardy is a Radio 4 legend, a description that makes him sound like he's practically dead but he's the one who keeps writing show blurbs that bring it up, so... He plays Tuesday 9 July, and you could make a great night of it by following on with a preview from Sara Pascoe. Tony Law previews his next show, Nonsense Overdrive, the following day.

There aren't any tickets left for Ed Byrne's own show, but the festival's doing some double bill tickets for a slightly cheaper price than buying two separately, and you can still pick up a combo for Byrne and Mark Steel on Friday 12 July for £30. Whether that's appealing will probably depend on your attitude towards the kind of lefty satire Steel specialises in.