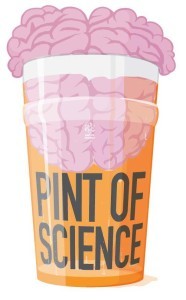 Regular readers will know that the science-themed events held in pubs is nothing new. But Pint of Science, running Tuesday through Thursday, is different in its scale and scope. Over the three days, some 27 events run across nine pubs on the themes of body, biotech and the brain, drawing on expertise from three London Universities (and that's just in London — there are parallel programmes in Oxford and Cambridge). About half the events are already sold out, but you can grab free tickets to the remaining talks on the Pint of Science website.

We can also look forward to Museums at Night, which runs Thursday through Saturday. We've rounded up the highlights here, but we'd naturally recommend the Museum of London Docklands late, on Saturday, which features (among other things) a Thames-themed quiz by Week in Geek compiler Matt Brown.

ART: Satdeep Grewal's new exhibition at the Brady Arts And Community Centre (Hanbury Street) draws from scientific imagery and mathematics. Grewal uses abstract forms and tactile surfaces to bring out the chaos and fluidity embedded in these supposedly objective, rigid ways of viewing the world. Free, just turn up, until 31 May.

NOVELS: This month's Fiction Lab — a book club devoted to novels about scientists — is on Pure by Andrew Miller and at the usual venue of the Royal Institution. Free, just turn up, 7pm

PARANORMAL: Hayley Stevens is this month's guest speaker at London Skeptics in the Pub, at the Monarch, Chalk Farm Road, where she'll discuss paranormal research for the non-believer. £3, just turn up, 7.30pm

MUSEUMS SHOWOFF: Museum curators, directors and others share their stories, in a sort of comedic way, live on stage at the Black Heart in Camden Town. We suspect Museum of London director Sharon Ament will be good at this, and we know the Science Museum's Kat Nilsson will be a laff. And then there are nine others on the bill. Looks great, and we'll be there, so do say hello if you come along. Free (but charity donations encouraged), just turn up, 7pm

TRANSPORT: We've heard endlessly from politicians and campaign groups about the pros and cons of building the High Speed 2 rail line. Now hear from an engineer about the challenges of the project, at City University, Northampton Square. Free, prebook, 6.30pm

BOTANY: Hear from an artist and botanist about Arctic Poppies, the northern-most flowering plant in the world, at Dana Centre. Free, prebook, 7pm

SCIENCE SHOWOFF: Museums Showoff's elder sister Science Showoff takes place at the Star of Kings, in King's Cross. Academics share their passions, including the biology of hangovers and the science of Megashark vs Giant Octopus. Free, just turn up, 7pm

CRIME TECH: Hear about the history of technology in the services of the police, in an event at the IET. Free, prebook, 6pm

HISTORY: Did you know Isaac Newton, as well as being among the greatest scientists of all time, was also in charge of the Royal Mint at the Tower? Tonight, a lecture at that Historic Royal Palace considers his battle against a master counterfeiter. £12 (includes wine reception), prebook, 6.30pm

SCI-FI: The Royal Observatory's film evenings return with a screening of the original Invasion of the Body Snatchers, followed by a discussion of the science behind the movie. £7, prebook, 6.45pm

CLIMATE CHANGE: Interested in how climate change could affect London? The BBC’s science correspondent Jonathan Amos will chair a free talk on sea-level rise given by a group of world-leading scientists at the Royal Institution. Free, just turn up, 7pm

HUMANS Vs INSECTS: Wellcome Collection continues its Pestival series with a panel talk about our species' relationship (good and bad) with insects. Free, prebook, 7pm

OPENTECH: This one-day, low-cost conference explores 'slightly different approaches to technology, transport and democracy'. It's held at University of London Union on Malet Street. £5, prebook or just turn up, 10.45am

MANGA: The Comican MangAsia fair comes to Asia House, for all your manga and anime and comic needs, with talks, workshops and stalls. Prices vary, prebook or just turn up, 11am-4.30pm

FAMILY EVENT: Andrew Lane, author of the Young Sherlock Holmes series will be at Bart's Pathology Museum to read from Lost Worlds, a book following ‘cryptozoologist extraordinaire’ Calum Challenger, a disabled 15-year-old boy on a mission to track down supposedly mythological creatures and capture their DNA. £4, prebook, 1pm

FAMILY EVENT: Join Simon Mayo as he reads from his children's stories about intrepid element-hunter Itch, while scientist Andrea Sella performs accompanying experiments. It's at the Royal Institution, who also hold an element-themed workshop for the over-12s earlier in the day. £10, prebook, 6pm

Special Notice
Our friends at Thinking Bob have a new-look website and are celebrating 2,000 members. They're a socialising club who arrange events with an intellectual slant — quizzes, debates, treasure hunts...that kind of thing. Do go check them out, and consider attending one of their many events.

Did we miss anything? Let us know in the comments, or email matt@londonist.com to tip us off about future events.