Peggy Lee Loves London: A Wuff Guide To The Capital 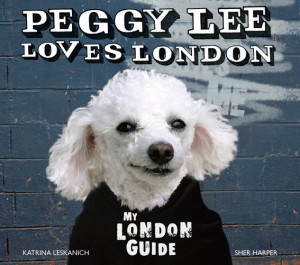 We've been sent some unusual books about London over the years: a guide to the city's 10,000 lion sculptures; a self-help book based on the Tube; Brian Paddick's autobiography...but this one takes the dog biscuit. It's a guide to the capital by pop star Katrina Leskanich (Katrina and the Waves), co-written by Sher Harper, but mostly starring Katrina's toy poodle Peggy Lee.

It's yet another book promising to go off-the-beaten-track to places 'that don't get a mention in the usual London guides'. While there are a handful of surprises, the majority of locations will be familiar to Londoners and the more inquisitive tourist. Katrina and pooch might walk on sunshine, but they don't walk south of the river — just one of the 62 recommendations is across the water, and that's City Hall.

But none of this is relevant. It's all about the bitch.

The little wuffster's expressive poses outside and inside London landmarks are among the finest examples of site-specific canine photography you're likely to see. Whether she's draping a curious paw over over the stock of Southbank book market, nursing a shot in the Blind Beggar, or gambolling in the snows of Victoria Park, this poodle has oodles of charm and stage presence.

The perfect gift for London-based dog lovers. Just don't put it on the shelf next to Bob the Tube cat's biography.

Peggy Lee Loves London is out now from something called the Metropoodle Press. Get it here.