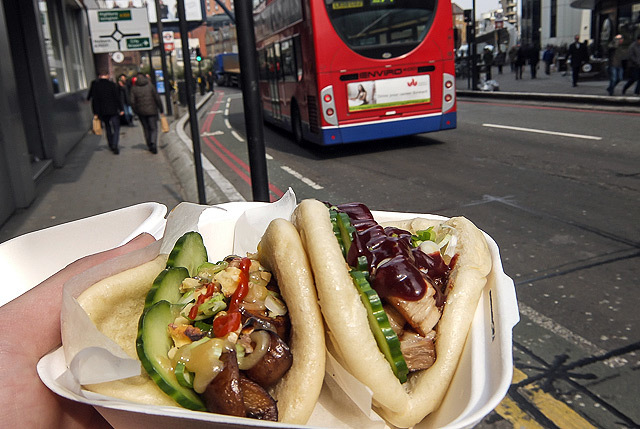 Street food mavens Yum Bun have gone semi-permanent with a new shop just off City Road, near Old Street roundabout. They've fetched up in a tiny unit next to a new bar called the Rotary; both will be in place for the next ten months.

Yum Bun has been a fixture on London's flourishing street food scene for a couple of years now. For the uninitiated, the 'bun' in this case is a soft, almost indecently fluffy steamed thing (actually a version of a Taiwanese gua bao), crammed with one of several fillings: on our visit it was pork belly, chicken, mushroom or fish, but they also do beef and salmon.

The highlight was the pork belly. Augmented with sliced cucumber, hoisin sauce and spring onions, this is seriously pleasing comfort food, easily devoured in a few messy bites. There's pure delight in the balance between the bun's softness, the cucumber's crunch, the tang of the hoisin and the succulence of the meat. The veg one was nearly as good, combining portobello mushrooms, cucumbers and a miso glaze to great effect. It's really one of the best quick-stop lunches we've ever had in London.