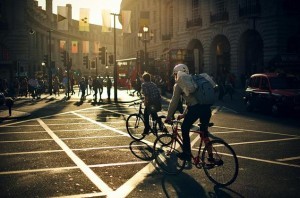 It's been a particularly bad morning for cyclists – three have been taken to hospital following collisions.

Transport for London is investigating after a 333 bus hit a woman on Kennington Park Road. One of Londonist's writers was in the area at the time and among a number of passers-by who tried to help. The cyclist has now been taken to hospital with leg injuries. Recent figures showed that buses are involved in, on average, two collisions a day with cyclists and pedestrians.

The Richmond and Twickenham Times reports a man taken to West Middlesex Hospital after colliding with a car in St Margaret's Road (luckily, emergency services were already on the scene dealing with a house fire in the same street).

And the Kingston Guardian says a man in his 30s was taken to St George's Hospital with head and chest injuries following a crash with a van near Norbiton station.

Three in one morning; and that's without even considering all the minor scrapes and scares that will go unreported. For all the talk of a few 'mini Hollands' in outer boroughs, redesigned roundabouts and council-backed bike loan schemes, it's clear we still have a long way to go before cyclists are safe on London's roads.