The Book Of Mormon @ Prince Of Wales Theatre: Trust The Hype 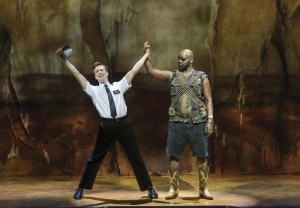 A musical written by the creators of South Park, you say? AND the guy who did Avenue Q, you say? Hell freakin’ YES (we say).

Since it opened to acclaim across the pond two years ago, London has been eagerly awaiting the arrival of the multi-award-winning Broadway sensation by funny men Trey Parker, Matt Stone and Robert Lopez. FINALLY, it arrived. And it was so worth the wait. London has welcomed the US hit to its bosom. Well, not so much the critics, who have been a bit po-faced and British about it, determined not to be impressed by something so hyped. Anyway, its audiences are loving it and, hey, that’s what matters, right?

So. The story. Two young Mormon missionaries, Elder Price (Gavin Creed) and Elder Cunningham (Jared Gertner), are posted to a remote village in northern Uganda to spread the word of Jesus Christ of Latter-day Saints. But when they’re robbed at gunpoint and confronted with cynical villagers more concerned with poverty, dysentery and AIDS than dealing with idealistic proselytisers, not to mention the threat of local warlord General Butt-Fucking-Naked (Chris Jarman), who’s bent on circumcising the female population and has a worryingly casual attitude towards shooting people in the face, the naive 19-year-olds realise this mission may be harder than they had anticipated.

Naturally, hilarity ensues and the two elders find themselves in all sorts of difficult situations. But good prevails and moral lessons are learnt. The whole thing is obscenely and joyously camp, complete with tap-dancing, pink sequinned waistcoats and plastic lunatic grins. The characters are infuriating yet lovable, the cast’s energy and precision are admirable and the songs are catchy and great fun – even when they’re about raping babies (or frogs). Trust the hype. You’ll be roaring and whooping and standing ovationing your tits clean off.

The Book Of Mormon runs until 14 December at Prince Of Wales Theatre, Coventry Street, W1D 6AS. For tickets, call 0844 482 5110 or book online. Londonist saw this show on a complimentary review ticket.