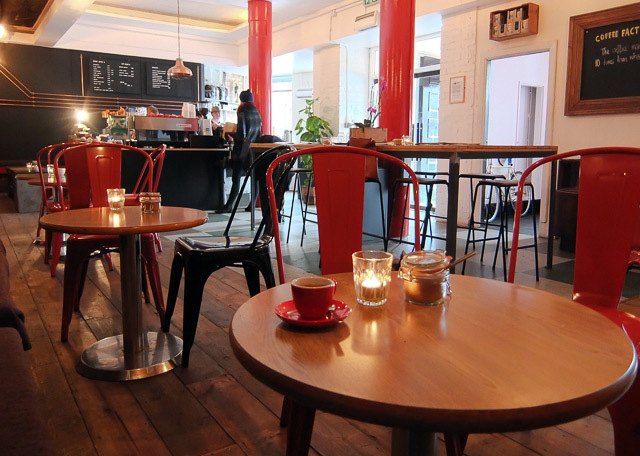 Back in 2010, the owner of The Foundry, a popular bar in Shoreditch, sold the site to a developer who planned to knock the building down and construct a grotesque "art'otel" (sic) in its place. Patrons and fans of The Foundry were outraged, and occupied the bar for a few months(we managed to smuggle in a reporter for a rare interview) but were eventually turfed out.

The art'otel was slated for a 2013 opening, yet visit today and the old building still stands. Where one might have expected to see minted art tourists roaming, there is a new coffee shop, Bird and Ballard.

Those who recall the gloomy Foundry will be surprised at just how light the cafe is: the interior has mostly been restored to the building's pre-Foundry incarnation as a bank, and bold splashes of red on the chairs and support beams make for a welcoming atmosphere, while the frivolity extends to a chalkboard with a weekly 'coffee fact' ("The UK coffee market today is worth 10 times its value in 1997").

The staff are equally friendly; in fact the only sour note was the coffee itself which, on our first visit, tasted a little over-roasted, although things were much better on a subsequent visit. The highlight, though, was undoubtedly the gluten-free Battenberg, which we urge you to try, whether you're bothered by the glutens or not (we're not, as it happens).

Bird and Ballard currently has a lease until this October, after which it may be forced to close, so enjoy it while you can. Grubby but loveable bar turned chic cosy cafe — could there be a better Shoreditch metaphor?

Find them at 84-86 Great Eastern St, EC2A 3JL, and follow them @birdandballard.

Disclaimer: We review anonymously and pay for all our meals / drinks.