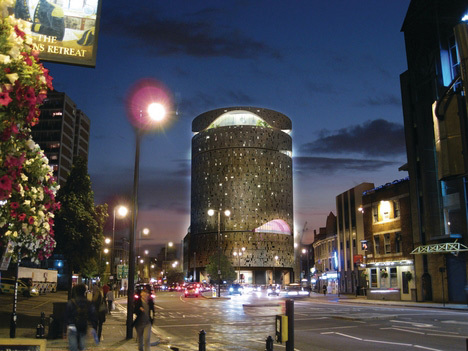 The Art'otel (sic) in Shoreditch, a hotel inspired by the common kitchen flip-top refuse receptacle that was presumably drawn up on a slow day at architect Squire & Partners', has been approved by Hackney council.

As we reported last November, the 18-storey hotel has fomented opposition from fans of local bar The Foundry, an affectedly gritty boozer (with token Banksy out back) that will be demolished, and the Victorian society, which believes, not without some merit, that the erection of a gargantuan garbage bin might not settle well in the South Shoreditch Conservation Area.

Despite these concerns, and an online campaign, Hackney council saw fit to wave the project through, in the process sinking another nail into the coffin of the area's fading individualism. What could be more fitting as an epitath for Shoreditch than the Foundry, a ramshackle, tawdry but occasionally exciting home for the alternative arts scene, being replaced by an 'art-themed' hotel?

Should the hotel be built, it'll prove a nice counterpoint to the equally geometrically abusive Bezier apartments (due to open in March this year) located just a short walk down Old Street.